The great thing about found images is that you get to make up the story. I bought this mid-1970s press photograph at the flea market on 25th Street many years ago for fifty cents and recently came across it again. The image depicts what I presume to be a somewhat exploitive music group or specialty act called The Tom Thumb Show which featured a morbidly obese young man, (for those of you who don’t know, “Tom Thumb” was a character of English folklore dating back to the 16th-century who was no bigger than his father’s thumb). As I stared at the picture, both funny and so sad, it occurred to me that in some ways The Tom Thumb Show would have a better chance of success today than in 1975, but for all of the wrong reasons. So I let my imagination wander a bit and here is what I came up with. 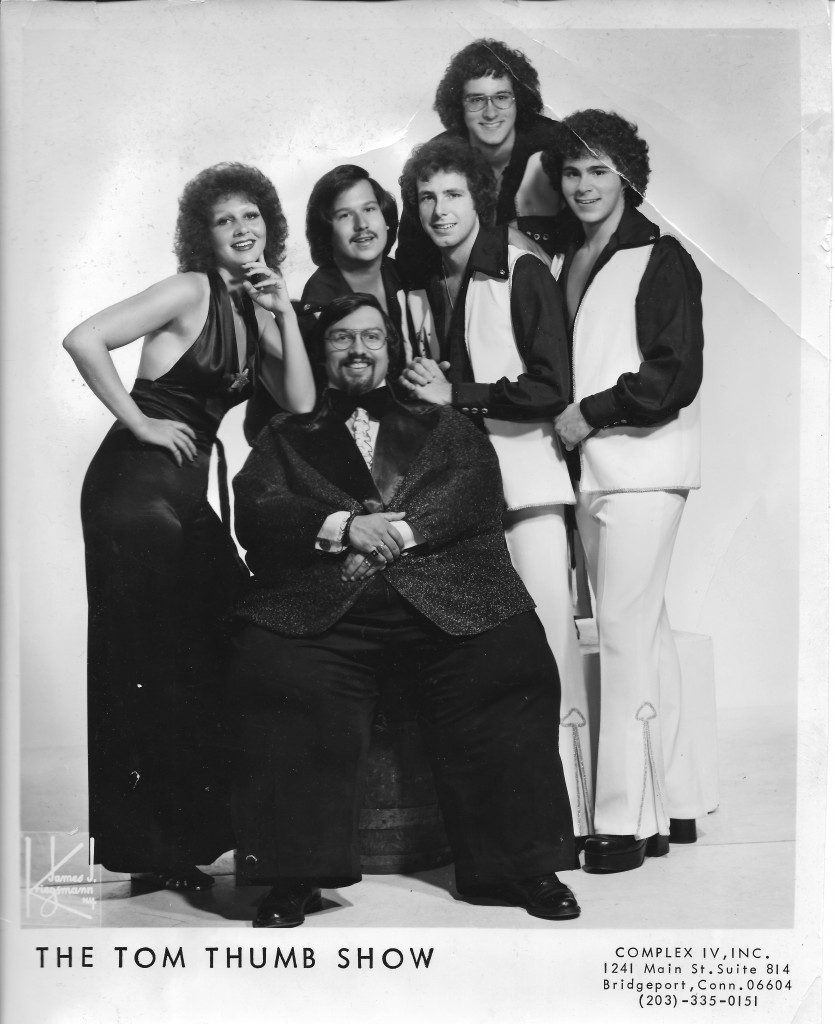 In 2014 The Tom Thumb Show, a dysfunctional family singing group, would star on a VH-1 reality show—a hapless musical act so out of step with the times that younger, contemporary viewers would lack a cultural reference point that would make them a parody.  But people today do understand junior high school-level conflicts, of which the group has no shortage; indeed, it is their inability to treat each other respectfully after thirty years of a downward professional trajectory—playing Bar Mitzvah’s in the 1970s, then playing seedy bars throughout New England and, by the 1990s, the county fair circuit—and the attendant stress of their protracted struggle, that finally gives the quarrelsome clan a chance at the big time.

As their reality show would reveal, the Tom Thumb group members share absolutely nothing except animosity for one another and the want of a single cohesive musical idea.  Additionally, it is a daily challenge to keep their lead singer, 400-pound Tom, clothed, fed, and ambulatory enough to perform.  Through the leadership of their longtime management, Complex IV, (actually their controlling mother Diane Maloney), they begin an ambitious merchandising plan on the back of their first season on TV.  They open a restaurant in Bridgeport that begins to catch on as the word about the oddity of Tom Thumb spreads.  This triggers a vicious cycle: the more money they make, the more they fight; the higher the ratings go, the more Tom eats.

By the end of season two, Mr. Thumb gets so large that he is, sadly, confined to a bed.  A clip from the episode in which perky sister JoAnn confronts Tom about his weight—and he defensively responds, “What?  I’m just grazin’!”—goes viral, quickly becoming the most successful YouTube meme ever.  People all over the country make cruel parody videos of the acquisition of enormous quantities of food that all end with the catchphrase, “What?  I’m just grazin’!”

In a fiscally motivated move that harkens back to both the freak shows of the 19th-century and John Travolta in the mid-1970s TV movie The Boy in the Plastic Bubble, “momager” Diane insists that they renovate the restaurant so Tom can live in a glass box in its center, giving him continual access to the kitchen.  She also re-brands the entire enterprise I’m Just Grazin’!  Her highly exploitive, macabre gambit works, as these changes appear to thrill the tourists who flock from all over the country to see sad Tom, the reality TV oddity, “graze” in person.  In short order, a line forms outside the door and ratings soar.  Tom Thumb bobble heads become the de rigeur dashboard accessory for the super-sized American viewership.  Tom records a solo dance record, “I’m Just Grazin'” that becomes the most downloaded song on iTunes and the biggest novelty hit since “Gangnam Style.”  In short order, Billboard Magazine and then The Guiness Book of World Records bestow upon Tom the dubious distinction of being the fattest person ever to have a number one record.

Throughout season three the situation deteriorates.  In a final attempt to save Tom’s life and boost ratings for May sweeps, the family arranges for Doctor Oz to visit Tom’s glass box at I’m Just Grazin’! and stage a dietary intervention in front of all of the restaurant patrons and an audience of millions.  Though nothing about the event actually resembles reality, Americans—if you’ll pardon the phrase—eat it up.  The cross-promotion of the two shows is extensive and, with the whole world watching, Tom declares through his tears that he has decided to “stop grazin’ and start livin’.”

Before season four, Tom secretly gets gastric bypass but, in Star Jones fashion, pretends he is just eating “sensible portions” and making “healthy choices.”  A nation of obese, diabetic viewers is riveted by the illusion that Tom is losing weight organically.  He sheds 150 pounds, becomes a national spokesperson for Jenny Craig—the first man to do so—and begins a solo career as a host.  Unfortunately, as with Carnie Wilson before him, the food addiction morphs.  Tom begins binge-drinking and decides to go into rehab.  This is widely seen as an extremely brave move (because it’s always perceived as extra-courageous when you admit your problems on television).  So Tom Maloney does what anyone in his situation would do: he joins the cast of Celebrity Rehab to clean up, further monetize his addiction issues, and refurbish his brand.

Now sober, almost thin, and richer than Midas, he reboots his TV career, determined to “help other people by sharing his story.”  The Food Network gives him his own lifestyle show about healthy choices called “Stop Grazin’ and Start Livin’,”  but fickle Americans, now bored by his seemingly conflict-free existence, tune out.

One year later the show is canceled.  A year after that, dirty Tom Thumb bobble heads become a fixture at garage sales and people have a good laugh trying to remember his catchphrase.  Ten years later Tom becomes a Trivial Pursuit pink wedge question.  He reaches his final destination as an answer on Jeopardy!

*One of the things I most enjoy about writing a blog, is that I often learn so much from my readers. For example, some time in the last six months I received this email from an original member of the Tom Thumb band! The gentleman whom I’ll call Mike (he asked that I not reveal his true identity), wrote the following:

“I was in the Tom Thumb Show (band) in the mid 70’s… I found your theoretical story kind of sad, but entertaining non the less.

The actual band traveled the country playing different resorts and supper clubs for usually two weeks at a time, 11 months out of the year. We would preform 3 dance sets and two shows a night. Tom (Alvarez), was a very good signer and a great front man, he was also a magician and preformed magic through out the night, interacting with the audiences. Tony Mason was the girl in the band and her career included time with the Angles during the late 50’s and 60’s. Rick Engler was the guitar player and he was also a minor celebrity in the 60’s through out New England, had a few hits on AM radio as well. The shows were themed excerpts from Broadway musicals of the day, like Music Man, Jesus Christ Super Star, Pippin, Doug Henning’s Magic show, and Cabaret ext.. I was the bass player and came along just after this picture was taken… If you no longer have a need for the picture I would certainly appreciate it if you could send it to me. Anyhow, thanks for the story, good job and fun stuff. Jim

David, thanks for the note…I did not mean to imply that I was upset, on the contrary…I found it very creative, a little dark, but well written and current. After I left the band, Tom and the group continued touring and I lost touch with them… believe it or not Tom use to have women throw themselves at him, he was also married but had several affairs while I was in the band. I am sure his health caught up with him at some point, however while I was with them he was a rock soild, jovially, and the consummate professional entertainer.”

"After the Glitter Fades": Remembering Laurel Canyon Vintage in Words and Images