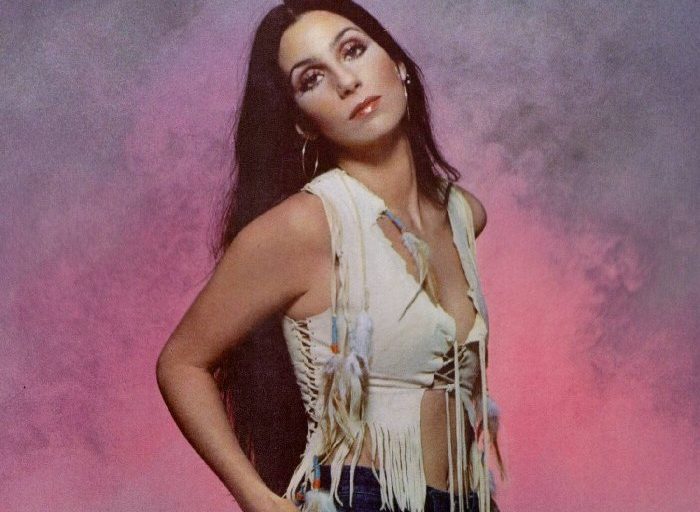 “After a nuclear holocaust, all that will be left are cockroaches and Cher.”

What is so fucking hard about writing a few paragraphs about Cher?   I am embarrassed to say I have been wrestling with this blog entry since February! Seriously. Sadly. But I have run out of time, you see, because today is Cher’s 64th birthday and I made a commitment to myself to get this done by today. It’s not like I’m ambivalent. On the contrary, I probably care too much. I think my writer’s block is more clinical.  Every time I attempt to write about Cher I get a terrible case of Cher-head, which basically means my brain gets so flooded with excitement, memories and ideas that I begin to feel anxious and end up doing something less stressful, like watching the surreal Beatles medley with Cher, Tina Turner, Kate Smith, and Tim Conway from a 1975 episode of the Cher variety show. Here is a still from that episode:

I realize I could write a whole blog about this number—I won’t, but I could. Let me just say this: I love medleys and deeply regret that no one seems to know what they are anymore; I love the oh-so-70s super graphic set; I love that Tina and Cher are so cool together and so clearly close friends and how poor Kate Smith, ever the professional, does her best to gamely blend in, but just can’t (in my fantasy world—where I still spend a great deal of time), it’s like an episode of Glee where Kate is the big girl with the big voice who wants to be friends with the two most popular girls in the class but doesn’t really fit in but tries anyway and Cher, who is popular but also nice, makes a real effort to include her and make her feel like she is hip and cool; I love the cheesy laugh track and clumsy insertion of Tim Conway; I love that Ike Turner is banished to Siberia—relegated to leading the marching band—which, in my fantasy, Cher demanded because Tina told her privately that Ike beats her and she was going to leave him in the next five minutes and this was Cher’s way of retaliating on Tina’s behalf; but most of all, I love that when I grew up, Cher and I watched this clip together over and over, crab-combing and laughing till our bellies ached.  She was completely tuned into what I saw and she thought it was hysterical too.  “Yeah,” she said, “Kate was something else!

This mash up of diametrically opposed musical styles and eras could only have happened on a variety show in the 1970s and, luckily, Cher was right in the middle of all that.  For the last forty-five years, Cher has been in the middle of a lot of things, and that’s why I keep getting Cher-head.

When I explained all this to friends, they were understanding.  One said that it was because Cher has been successful at so many things for so long, and because of what happened to me when I was really little in New Jersey, and because when I grew up I actually got to know her socially and worked with her that’s why I was overwhelmed.  Another suggested that I break this down into as many smaller blog entries as I needed to in order to do it properly and “stop freaking out over Cher.”  She also said this Cher-head thing was very gay which immediately reminded me about the time in 2001 that Cher left a message on my cell phone.  At that time, I was running Bruce Roberts’ music publishing company in Los Angeles. Bruce and Cher had been close since the late 1970s and it was he who brought Cher into my life.  Anyway,this is what her phone message said:

“Hello Mrs. Munk. Its Cher. Obviously. Listen, I don’t know what you’re doing and what can be so important that you’re not picking up, but you need to call me and Brucie back right away because you should be working…there’s alot to do.  We’ve come up with the name for the next record. You ready? It’s Chergay and it’s gonna be an album of Russian dance music! Ha! Whatdya think?  So get off your lazy gay ass and call us back!”

It gives you some insight into how full of myself I was that I didn’t save the message, as if Cher would be calling me forever!  I didn’t mean to start talking about how I met Cher until a subsequent blog—I was going to start at the beginning and talk about when I first became interested in her as a boy and why, which I’m definitely going to do today, but before that, I want to say, oh shit, wait, my mother is calling….

Okay, my mom says I should definitely include the story that I just told her.  I’m not into numerology really, but when I was procrastinating an hour ago I made a Cher playlist in iTunes—a sort of soundbed while I suffer with writing this piece.  Now I have over 270 Cher songs in my iTunes library (which is not that much considering she has been recording since 1964, also the year I was born).  Anyway, I quickly highlighted all the songs I wanted and dragged them into a new “Best of Cher” playlist and here’s the weird part: there are 64 songs in the playlist.  Get it? Today’s her 64th birthday!  I was born in 1964. I’m just saying.

Here is my original beginning, which is very journalistic and dry, but since it took me six and a half weeks to write, you bet your ass I’m gonna include it:

For a fairly large percentage of the world’s population, Cher has just always been there, famous for one thing or another. Sometimes vilified, sometimes deified, but always, somehow, there.  A case study of charisma and sheer good fortune, Cher is an anomaly: an enduring multi-media superstar who is, in her own words, “not the most talented person.”  Yet, since August,1965, the month that Sonny and Cher’s I Got You Babe went to number one, Cher has flaunted convention and prevailing cultural trends to build an extremely impressive body of work and create a series of pop cultural “moments.”

Okay, this is definitely gonna be a digression, but a customer just came into the store who was great and she said something that Cher herself would adore. She was an older woman from Charleston. When she came in, I was listening to Cher’s 1979 disco smash, Take Me Home. Pointing to the ceiling, she asked me in her lilting southern accent who was singing (Was she kidding? Who sounds like Cher but Cher? Love her voice or hate it, can there be a question of who?).  I told her it was Cher and that it was “Cher Day” at Chelsea Girl in honor of her 64th birthday and she smiled. “She sure has had a durable career,” she opined.  “Yeah,” I said, “not too many people have forty-five year careers anymore,” I said.  She smiled again.  “Cher and Queen Victoria!” she responded.  What can you do when a zinger like that falls in your lap?

“I think the longer I look good, the better gay men feel”

Cher is many things to many people.  In addition to being exceedingly funny and quotable, resilient, iconoclastic, forever true to her own personal sense of style and utter Cherness, she is also definitely one of my all-time favorite people. Out of all the many big stars I’ve gotten to know, Cher’s particular brand of self-centeredness was the most endearing. She was smart, relaxed, fun-loving and had the best sense of humor.

So what is it about her?  Her improbable four and a half decade pop culture blitzkrieg makes little logical sense unless you think about the most ancient of Hollywood’s mysteries: no matter her perceived limitations, Cher has “it.” To wit, my all-time favorite Cher album cover:

“Some years I’m the coolest thing that ever happened, and then the next year everyone’s so over me, and I’m just so past my sell date.”

Shit. I’m already over 1500 words and I’ve said nothing of significance.  I wanted to tell the story about when I produced, directed and starred in a drag version of the Cher show in my basement on October 17, 1975.  I wanted to talk about Cher’s influence as a fashion icon. I wanted to tell you about the first time I went to Cher’s house. And the Sonny & Cher reunion on Letterman, the “Farewell” tour that wasn’t, adult braces, Moonstruck, tabloid culture, comebacks, 1960s counterculture, Disco, the CBS censors and her navel, single parenting, Will and Grace, tattoos, transgendered children, Half Breed, Gene Simmons, bell bottoms, plastic surgery, Robert Altman, The Witches of Eastwick, the pitfalls of infomercials, David Geffen, Silkwood, the If I Could Turn Back Time video controversy, the Rob Camilletti “bagel boy” brouhaha, Bob Mackie, the day I sang her the Cher doll theme song, Epstein-Barr virus, Sonny’s eulogy, Believe……

I have terrible Cher-head.  Look for Part Two sometime in 2011.  In the meanwhile, happy birthday!  Love, Mrs. Munk.

The Beat Goes On: The Story of a Boy and His (Sonny &) Cher, Part Two

An Urgent Sartorial Warning to Heterosexual Men: Ixnay on the Square-toed Oaferslay!