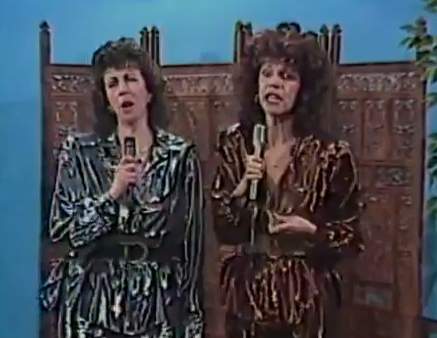 By this point, it is fairly obvious to Stargayzing readers how I feel about Stairway to Stardom, the local New York cable talent show that ran for almost 20 years and, at least for me, holds a distinctive place on a continuum that includes everything from The Ted Mack Amateur Hour to The Gong Show to America’s Got Talent.  But in the pantheon of televised talent competitions, Horowitz & Spector deserve special recognition.

First off I’m living for the metallic jumpsuits.   I would wear one right now if you put it in front of me.  Fact is, I pretty much wore one in 1988 just like they did.  When I watch the clip, I find myself almost reflexively begin to relax.  I’m not sure if this is due to the song itself which, for lack of a better title, I call “The Diet Song (Boiled Chicken)”—as witty a piece of special material as many I’ve heard in many a cabaret room—or the question of who is Horowitz and who is Spector, a meaningless point which I roll around my mind over and over like a mantra.  I think for people like me who have pop culture-Aspergers, this may be as close to meditating as it gets.

I could go on: the spare-nothing Stairway to Stardom set; the smile of the accompanist in the awesome two-shot with the ladies and the random house plant; the way the women pronounce souvlaki as “Sue Valocky,” like she’s a lady they know from the swim club.  In the end Horowitz & Spector sell “The Diet Song (Boiled Chicken)” for all it’s worth; they did a good enough job that 25 years later their chicken is still on the menu.

So tell me Stargayzers, is Horowitz in the silver jumpsuit or the copper?

Stairway to Stardom Redux: “Hairdresser”! A Tribute to Lucille Cataldo

Stairway to Stardom Redux: A Thrilling Medley and Promo Spot from the Legendary Miss Evie Day!

Movie Quote of the Day: The Upside of Anger