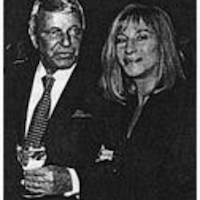 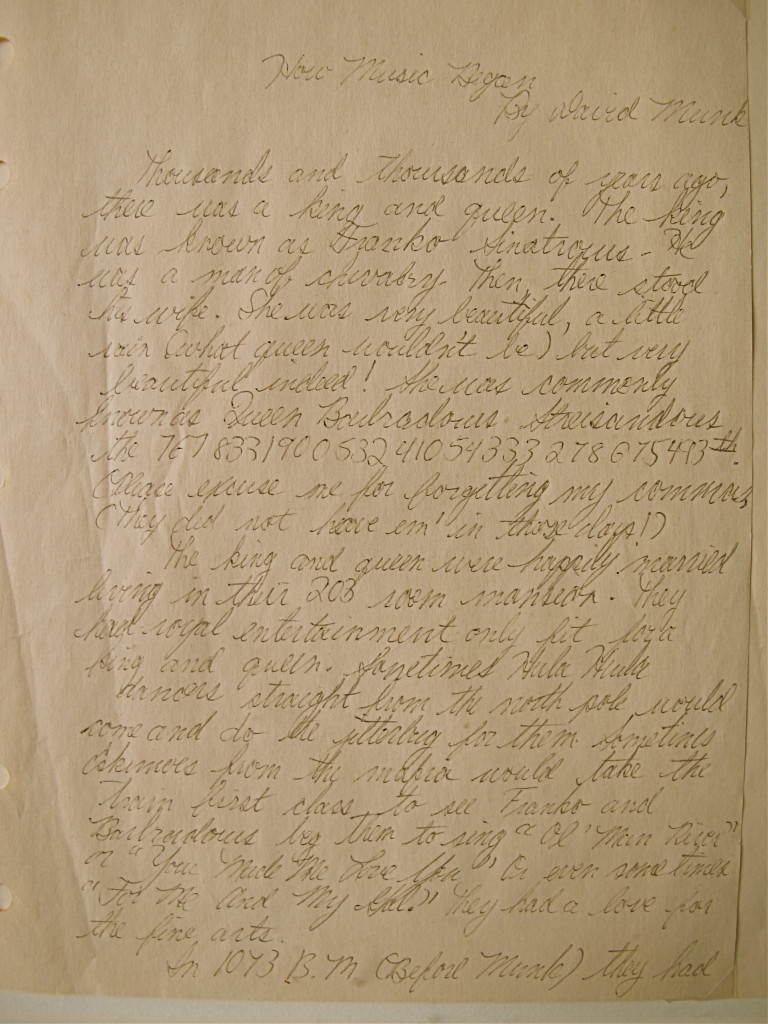 In 1973 my fourth-grade teacher Mrs. Schindler taught a unit on Greek myths at the end of which each student was given the assignment of writing his own.  My piece was called “How Music Began,” the story of the creation of music refracted through the world view of a nine-year-old gay kid who was just beginning to become aware of grown-up popular culture.  I remember liking my work and proudly wrote it out on ruled paper in my most floral penmanship.  (A word on my love of cursive writing— certainly a dying skill: by fourth grade I was already getting used to being told that I “wrote like a girl,” a dersive comment that managed to be homophobic and sexist simultaneously, but I always took it as a compliment.  I never understood who wouldn’t want to have beautiful penmanship; indeed in grade school very few things were as unassailable as my belief in the beauty of what was referred to in the 19th-century as “a beautiful hand.” )

A few things that I find interesting about my little fourth-grade myth are the concept of a “thinking room,” my completely un-mathematical relationship to numbers and, almost inevitably, the fact that Judy Garland wends her way into the narrative by proxy, via several songs from her repertoire that were performed by “Eskimoes [sic] from the mafia.”  “How Music Began” is gonzo, gay creative writing for the under-ten set and, if nothing else, suggests that I spent so much time living in my head and watching TV that the two became fused, a reasonable and harmless enough bromide for what was going on in the real world.

For many years the myth seemed happily enough ensconced above the porcelin throne in many people’s favorite “thinking room.”  I would like to dedicate the publishing of “How Music Began” in Stargayzing—some 41 years after it was written—to my friend Dan Levin, who read it as he urinated and emerged from the loo with, most remarkably, most of the first paragraph committed to memory.

I like “How Music Began” both for its precocious Borscht Belt swagger, but for its rather transparent window into the adult I became.  After the jump is “How Music Began” in its entirety, copied verbatim with all the original fourth-grade grammatical errors.

Thousands and thousands of year ago, there was a king and queen.  The king was known as Franko Sinatrous.  He was a man of chivalry.  Then there stood his wife.  She was very beautiful, a little vain (what queen wouldn’t be), but very beautiful indeed!  She was commonly known as Barbradous Streisandous the 767833190053241054333278675483th (please excuse me for forgetting my commas—they did not have ’em in those days!)

The king and queen were happily married living in their 203 room mansion.  They had royal entertainment only fit for a king and queen.  Sometimes Hula Hula dancers straight from the north pole would come and do the jitterbug for them.  Sometimes Eskimos from the mafia would take the train first class to see Franko and Barbradous beg them to sing “Ol’ Man River” or “You Made Me Love You” or even sometiomes “For Me and My Gal.”  They had a love for the fine arts.

In 1073 B.M. (Before Munk) they had their first child, a daughter.  They called her Cherious Bonous.  She was always merry.  Her parents were always amused becasue she always would want to play “Pin the pin on the Pied Piper,” “Ring Around the “Collar” or “Laceball.”

Then they thought and thought again only this time they thought for 67 years then Franko came to a conclusion.  We shall call our noise MUSIC***

Addendum: Speaking of music, in real life Streisand didn’t seem to have much use for Sinatra, allegedly dismissing him as a “saloon singer” at some juncture in the 1960s.   While that may or may not be true, by the 1990s Streisand’s feelings toward Sinatra had warmed to the point of recording a song with him for his 1993 Duets album.  Although the two legends were not actually in the studio simultaneously, there does seem to be something like actual appreciation for one another.  On the other hand, in addition to being the greatest singers of their respective generations, they were also Oscar-winning actors, so who knows?  Here is their 1993 duet of “I’ve Got a Crush on You.  What do you think, affection or affectation?

I’ve Got a Crush on You

In Honor of Barbra Streisand’s 70th Birthday: How America’s Greatest Voice Helped Me Find My Own.

How You Can Make Your LinkedIn... 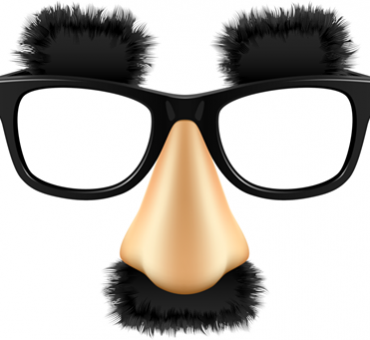 What's in a Nose? Part Two: The Orson Welles Proboscis 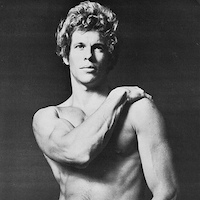