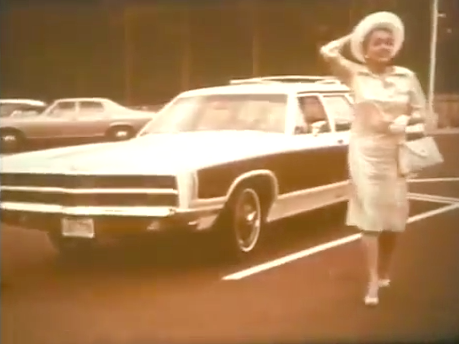 Though it precedes the infamous Trog by a year, Big Rock Candy Mountain, a bizarre Pepsi promotional film from 1969, is most certainly the last compelling film role of Joan Crawford’s long, sometimes thrilling, and frequently surreal career, an arc that began in the mid-1920s and summarily ended with some forgettable TV work in the early 1970s. Though it clocks in at under three and a half minutes—less time than it took Joan to smoke a Kent 100—it manages a kind of subversive excellence that the star’s turgid late-period work could only aspire to.  In a stunning mash-up of cinema verite elements (its subject—shopping at a supermarket and sloppy you-are-there camerawork) and uber-discordant old school Hollywood characteristics (the God-awful dialogue, Joan’s Pat Nixon-esque wardrobe, and Continent-by-way-of-Culver City elocution), Big Rock Candy Mountain commands your attention and in scene after wretched scene. If the inability to avert one’s eyes were the sole measure of a film’s value, Big Rock Candy Mountain would be favorably compared to Citizen Kane!

I only recently became aware of this faded curiosity thanks to the ace curatorial skills of my twisted friends at World of Wonder.  I actually hadn’t planned on saluting late-period Joan Crawford quite so soon, but my reaction was so immediate and visceral that I just wouldn’t feel right about keeping it to myself.  Now if the title Big Rock Candy Mountain sounds familiar, that’s because it is also the name of a very well-known novel by Wallace Stegner that was published in 1943 and oft-recorded song that dates from the 1800s. The song tells the story of a hobo’s idea of paradise and has been recorded over the years by everyone from Burl Ives to Tom Waits, whose version was included in the 1987 film Ironweed starring Jack Nicholson.  The Harry Maclintock recording from the 1920s was memorably included on the soundtrack O Brother Where Art Thou. But this illustrious and media-spanning history of its title does very little to indicate its suitability to a film about supermarket shopping with Joan Crawford!  This is one of the reasons why I love it so.

“The film’s premise is simple: some suburban lady and her caffeinated, flaxen-haired daughter (echoes of Cristina Crawford here) are going to the supermarket. That’s it!  Oh, and one other thing: for a reason that the filmmakers never feel obligated to even allude to, the mother and child are accompanied by Joan Crawford, who appears in grand high-tea attire as if she had been in hair and make-up for six hours. The film is unbothered by an abject lack of internal logic that is nothing short of revelatory, and it only get’s better from there, because the insufferable child is drawn to tyrannical Joan, preferring to shop with the movie star than with her own mother! (This strains credulity: preferring the company of late-period Joan Crawford over your own seemingly sweet mother is an idea that could only occur to young gay boys).

“When I was a little girl, we used to say ‘God, where does the grass come from?”

Though one could not accurately describe it as “good acting,” Joan’s work here is nevertheless fully committed and imbued with typical Crawford intensity as she announces to the child and anyone else within earshot of the supermarket entrance: “I’m making a Spanish dinner, gazpacho and paella, if I can find all of the ingredients!” Her brusk, mannish affect reminds me of her performance in Harriet Craig, the 1950 soaper which featured the actress as a maniacal housewife who was more attached to her home and possessions than to people, a set of priorities which I suspect the actress had little difficulty relating to and when you consider the unpleasant characters and cast of that film, always seemed completely reasonable to me.

Big Rock Candy Mountain has some thrilling action sequences, my favorite of which finds the horrible little girl inveigling Joan to help her get a something called a “weirdo”—a little plastic monster—out of one of those old gumball-style machines. After a fantastic close up of Joan’s gloved hands turning the crank with the determination and ham-handed force that one usually associates with roping steer or controlling an 18-wheeler on black ice, the horrible little girl snatches her prize “weirdo” and ebulliently exclaims “It’s green!” Joan responds with the film’s best line, delivered in a disconnected hush that feels as though it was cut in from the opening of Possessed: “like the grass, like the trees, like Frankenstein’s monster.” Yes…exactly!

There are other laugh out loud moments: Joan trying to control a hat the size of a nun’s wimple in a windy parking lot; a really terrific montage sequence that includes shots of her happily choosing a lobster, grabbing at vegetables, and running her thick, begloved finger down the spice rack, ostensibly trying to find safron, but more likely checking for dust. When Joan is, at last, waiting on the cashier’s line, she fills the moment with a beatific glance across the conveyer belt and an absolutely smashing voice over about God—as if God has anything to do with Joan’s gazpacho: “When I was a little girl, we used to say ‘God, where does the grass come from?’ God. ‘Veal Cutlets?’ God. ‘Rhubarb?’ Oh no! Not rhubarb!“, before settling into to a well-intentioned but baffling digression about the real meaning of supermarkets, or something like that. This brings the piece to sweet and somehow satisfying conclusion. You just can’t make this shit up! Once experienced, these moments are not easily expunged from the memory—like the grass, like the trees.

Crawford’s performance will leave you tingling with pleasure, like the zesty zing of her gazpacho! I recommend repeated viewings, preferably with a convivial group of friends who have had a few drinks! Here then is the great Joan Crawford in 1969’s Big Rock Candy Mountain!

A House of Gingergbread and Bells” Or, the Night Joan Crawford Hypnotized America with a Fully-Orchestrated, Utterly Unintelligible, Six Minute Dramatic Reading About “Little Children.” Or—Really, About Being Joan Crawford 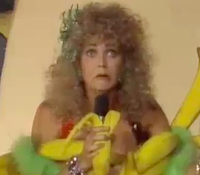