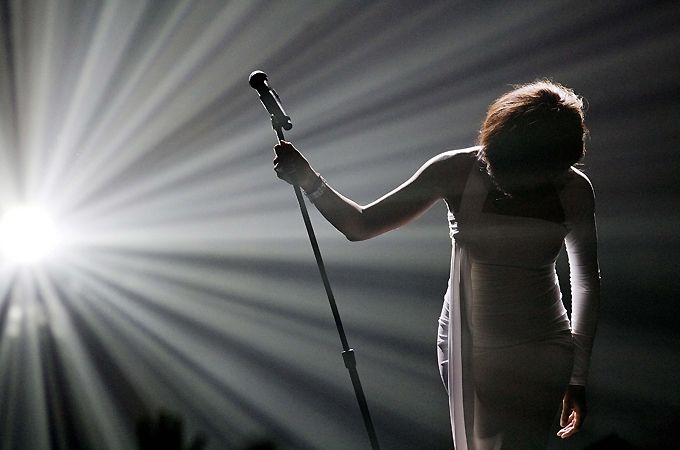 Was Whitney Houston killed by homophobia?  In the weeks since Whitney Houston’s tragic death which, given the circumstances of her very public struggles, seemed at once shocking and inevitable, I’ve been a bit surprised by my extremely emotional reaction.  I’ve noticed that many of my peers had similar responses.   I’ve wanted to write about it but felt unsure about what I wanted to say and what I could add to the avalanche of attention her passing has precipitated a media’s  coverage which almost unilaterally ignored the elephant in the room: Whitney Houston’s sexuality.

Of course I’ve thought about the joy her gifts brought to me and to the world and the terrible squandering of a truly tremendous talent.  To me, Whitney Houston’s voice was, literally, a stunning piece of golden cloth that embodied qualities of three of the most important vocalists of the generation that preceded her: the authentic gospel fervor of Aretha Franklin and her ability to take you to church, effortlessly tossing off vocal riffs, the clear, stunning tone of Barbra Streisand and her ability to swoop and soar and thrill you by holding a note with no riffing at all. Perhaps, most implausibly, on top of her astonishing vocal skill, she had the head-turning looks, poise and and effortless glamour of Diana Ross.  But there is more to the Whitney Houston collective grief issue than the loss of a great talent. 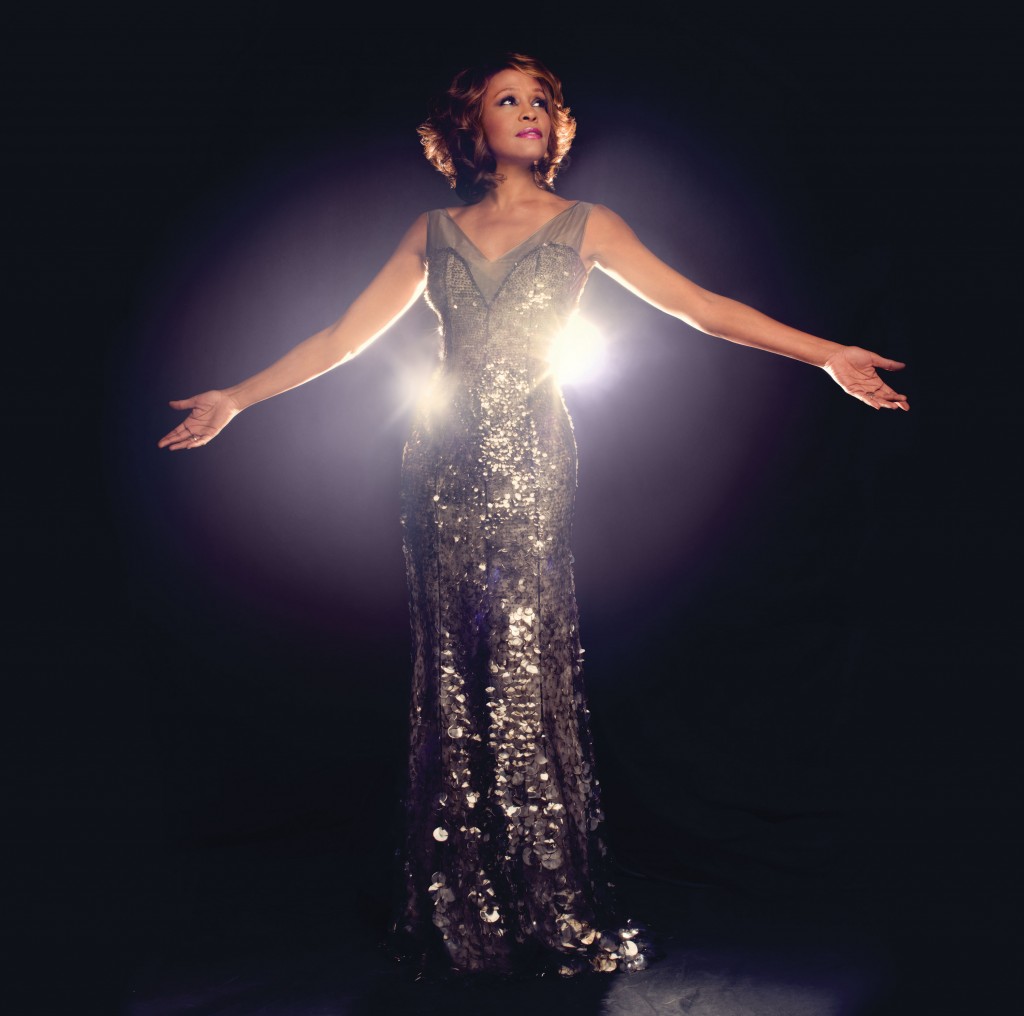 On a personal level, I’ve thought about the passage of time and how I lost my innocence roughly at the same time Whitney must have and at the same place: Arista Records.  My very first job in the business was at Arista, where I joined the Sales Department as an intern in 1988 as the label was “working” her second album Whitney.  From my vantage point on the floor, (literally — I didn’t have a desk), I observed a culture as permissive about drugs as it was unpermissive of failure.  While senior executives around me blew lines off their desks in the middle of the afternoon, I did my part to help the Arista machine accomplish its unilateral mandate for their prestige artist, Whitney Houston, to break the Beatle’s record of most consecutive number one songs NO MATTER WHAT!  This was the pre-Soundscan era, when, as I quickly learned, labels could manipulate the charts based on a complicated system of favors, gifts and deal-making.  At Arista we begged, borrowed and stole to make “Where Do Broken Hearts Go” Whitney Houston’s seventh consecutive “number one” record, thus surpassing a record formerly held by the Beatles.  I never believed the charts again and Arista has been bragging about Whitney’s “accomplishment” to this day.  But she didn’t need to break records to prove she was great, she only had to sing.

I’ve thought much about how Whitney’s troubles prevented her from creating a more formidable body of work (her output was slender:  just six studio albums, a few soundtracks, a Christmas album and a greatest hits package since 1985).  I’ve thought about addiction itself and the loneliness, struggles and suffering that all addicts endure.  I’ve imagined the interventions and the tremendous powerlessness the people who loved her must have felt as they watched the self-immolation of a supremely unique talent.

I’ve also wondered quite a bit, as I have for many years, which version of the Houston persona was authentic.  Was she the poised, all-American sweetheart that the world fell in love with, or the trash-talking, hoody girl who married a third-rate R&B crooner?  Was the warm, thoughtful girl we initially met just another Clive Davis construction that we were supposed to believe in? (Like Barry Manilow’s true loves: his dog and that chick named “Linda” that he thanked on the back of all his Arista albums).  Was the coarse, hardened, post-The Bodyguard Whitney who married Bobby Brown the real person or just the effect of the drugs?  Any exploration on this subject can’t be fairly addressed without considering another moving piece in this discussion of identity and image: Whitney Houston was definitely not heterosexual.  She was at least bisexual and her girlfriend for most of the 1980s was named Robyn Crawford.

As I watched Oprah Winfrey interviewing daughter Bobbi Kristina and sister-in-law Pat Houston the other night, (which scored huge ratings), I could feel how hard Winfrey was working to shape the narrative by the choice of which leading questions to ask and which to leave out.  It did occur to me that Winfrey would have multiple reasons, (perhaps even personal reasons), to avoid any discussion of sexual orientation.  But here’s the irony that that makes the media’s apparent complicity with the family and the record label to expunge any dialogue about Whitney’s sexuality so surprising: it really wasn’t much of a secret to begin with.  If you worked in the business, or at Arista Records, as I did, you knew that Whitney was at least bisexual, if not gay, and you certainly knew that for years Whitney was partnered with Robyn.  It was common knowledge, not proprietary information.  You’d be at a venue and see them kissing.  It just wasn’t that secret a secret, except to the public.

I bring this up not to be gossipy or salacious, but really because, as my friend and fellow cultural commentator Nancy Balbirer astutely noted to me, it seems entirely possible that Houston’s underlying emotional conflict and eventual death is probably as attributable to homophobia as it is to anything else.  It takes a lot of energy to stay closeted and most of us can only imagine what this felt like under the glare of fame as large as Whitney’s.  Here’s what I do know: Robyn was real, she was around for years and they were definitely together.  I also know that Arista Records and, indeed, the record business in general, was a homophobic place to be.  In fact, after nine or ten months literally working on the floor, I was “fired” by a homophobic executive with the initials K.A. who didn’t like fags, even ones who worked five days a week for free.  The label needed to contain Whitney’s open secret, especially as it was grooming her for a film career, a process which necessitated a husband.  Exit Miss Crawford.  Enter Mr. Brown.

I wonder too about the family —  a religious family for whom the church was a defining source of a strength; but also a church that most certainly does not sanction homosexuality.  Whitney is almost always characterized as being extremely religious and I imagine the pressure to be straight, or at least appear so, became overwhelming. If you’ve ever wondered why a woman who could have married a prince chose Bobby Brown instead, try thinking of it as a perfect expression of rage and an ideal way to say “fuck you!”  Of course, this is conjecture on my part, but it does fit nicely into the narrative that I prefer for Whitney.  The one that includes the story of her love for another woman and the price she paid for it.  I can imagine that these sacrifices could make someone very angry.  Angry enough to marry a creep and do a lot of blow.

In the end, with forces as powerful as Clive Davis, Oprah Winfrey and the church working overtime to shape the narrative, we will never hear the whole story. Whitney didn’t have the ability or inclination to be political about her sexuality, a fact that can be forgiven when you think about what she was able to share with the public: the music.  Still, I wonder if you agree with me that when it comes to the pervasive and destructive power of homophobia, it is fair to at least engage in a more honest dialogue about what may have driven someone who had everything in the world to lose everything.  Any truthful discussion would have to include the part about who Whitney Houston loved.  What do you think?

In parting, I admit feeling conflicted to the extent of wanting to, in the end, honor the music and Whitney’s preference to leave her sexuality out of it.  In that spirit, here is one of the best-ever live Whitney performances which finds her at the height of her power and truly captures her glorious voice and presence at a moment in time when it seemed that the world belonged to her.  From the 1989 Grammy Awards, here is Whitney singing Albert Hammond’s and my old buddy John Bettis’ anthemic summer Olympics ballad, “One Moment In Time.” In this age of  auto-tuned novelty records, I don’t think we’ll be seeing the likes of this again.

[Addendum: I had the video of this performance up for several years but it was recently removed from YouTube due to copyright violation.  This is typical short sighted, old media record label thinking.]  Here is the audio of that performance:

13 Songs That Should Have Been Top-Ten Hits, Volume 3: The Clive Davis Edition

Dim All The Lights for Donna Summer: One of Our Greatest Singers (In Any Genre) 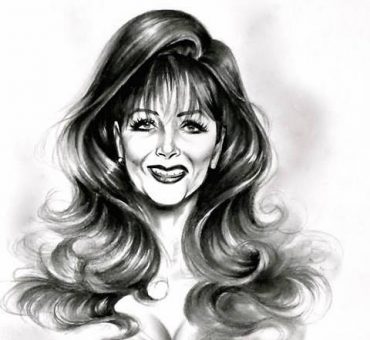