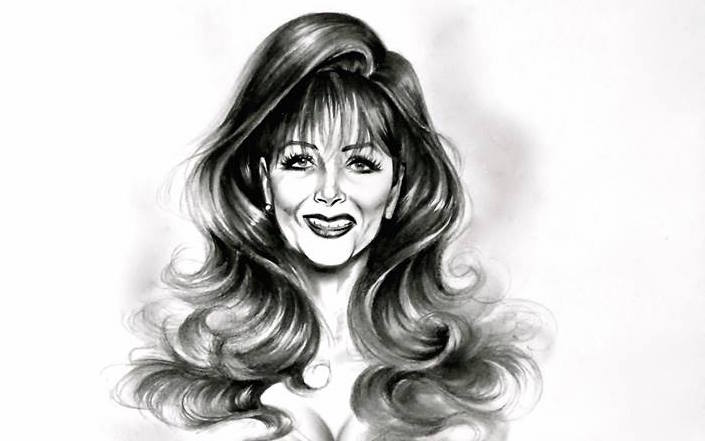 I’ve written at some length about my erstwhile friendship with Dynasty diva Joan Collins, but I must confess that Joan is not the only “Collins” in my black book. Back in 1999, I spent several months working on a CD with her dynamic sister, the late romance novelist Jackie Collins, who is probably best known for  Hollywood Wives and her very popular Lucky Santangelo series. Here is the story of how I came to be part of the creative team that spawned what is arguably the gayest song of all time, the hypnotically awful “Lethal Seduction”/”Dangerous Kiss Suite.” 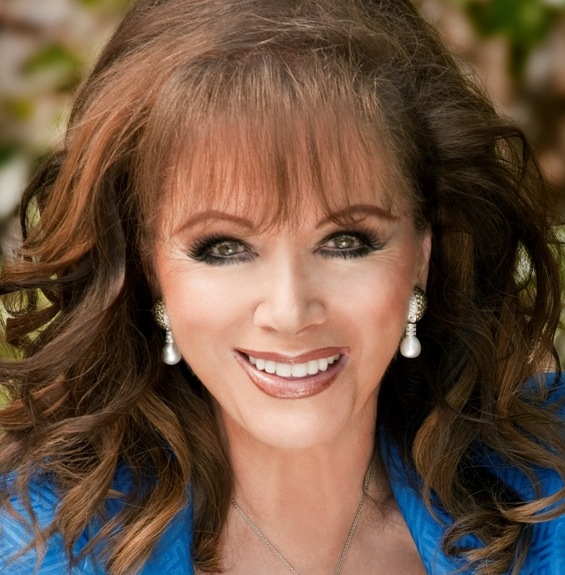 Remember compilation CDs? I do! In the prehistoric, predigital era of the 1990s, before social networking made everyone an expert in everything (“tell us what YOU think!”), record companies paid creative executives like me to put compilations together because the undemocratic presumption was that some people knew more than others. (I’m reminded here of Fran Liebowitz’s quip from the Scorcese documentary, Public Speaking, “when Maya Angelou said ‘write what you know,’ she didn’t mean everybody!”) Though I realize that a 5:32-second dance track with a spoken-word monologue by Jackie Collins may not be a very good argument for my skill as an A&R person, especially if you’re heterosexual, in the end, Lethal Seduction, the CD, is probably more compelling as an anecdote than a recording.

Rhino Records’ Jackie Collins Presents Lethal Seduction, was created, ostensibly, to tie-in with the release of her novel Lethal Seduction. This might have been an early example of multimedia synergy, or, in Collins’ case, “sin-ergy.” It was 1999 and I worked for Bruce Roberts, a great songwriter and an endlessly resourceful connector of people and ideas. (His biggest hit was probably the classic Barbra Streisand/Donna Summer No More Tears [Enough Is Enough], which was originally just Enough is Enough, but since Barbra was doing her water concept album, Wet, and all the songs had to have something to do with water, she asked Bruce and co-writer Paul Jabara to come up with a liquid solution and the memorable result was the No More Tears ballad intro: “it’s raining it’s pouring, my love life is boring me to tears…”)

But I digress. Bruce had been a fixture in the Los Angeles songwriting community since the late 70s and was a veritable compendium of Old Hollywood lore and trivia. Like a Beverly Hills Dolly Levi, he knew absolutely everyone and everything, whether it was a short cut to avoid Sunset or the hostess at Hamburger Hamlet, plus he cooked me lunch every day. The Lethal Seduction project was typical of the kind of madcap, homocentric silliness we both adored and that came so easily to Bruce with his glorious gumbo of a rolodex. In 1999 we were just on the cusp of the Napster juggernaut and CD sales were still huge business. But even in a healthy sales environment, it still seemed impressive that Bruce convinced the suits at Rhino that the world needed this compilation, which, according to the saucy liner notes that I (ironically) ghostwrote for Jackie, promised “Sex!, Passion! Danger! Romance!”, all on one “exciting party CD…as well as the perfect accompaniment to an afternoon by the pool!”  With a come on like that, tell me who could resist this compilation?

We had multiple meetings with the glamourous Miss Collins regarding said party CD in her sunny, sprawling Beverly Hills home. I remember her living room clearly: very white with vibrant leopard-print accents scattered about the space. Throughout I found Jackie to be a very fun hang — breezy and warm and somewhat less imperious than sister Joan. Actually, significantly less imperious than Joan.  She was a true professional: excited about collaborating and good-naturedly involved in every creative aspect of the project, from choice of songs to every visual element. I recall her particular interest in the cover art, which included an almost fetishistic preoccupation with the use of a leopard print, which, judging from her living room, was not a matter of small importance. On this point she was unbending. In fact the only time I ever detected a touch of sister Joan’s pique in her voice was when, like Dorothy the Meek approaching the Wizard, I brought her the initial leopard-print samples from the Rhino art department without first looking at them. I realized my error the instant Jackie pulled the shitty swatches out of the envelope, proceeding to admonish me with clipped Alexis Carrington Colby Dexter disdain for “wasting her time with sub-par leopard prints and hadn’t I learned anything from our conversations?” I took it like a man and didn’t bother explaining that the people at Rhino apparently didn’t understand the difference between good and bad leopard print as well as we did because the fact was that Jackie was right. As the album’s co-producer I should have been more mindful about shitty leopard prints, after all, forewarned is forearmed!

Professional as she was, there was one aspect of the project, (as it turns out, the best part) that Jackie had nothing to do with: its utter absurdity. That was private. The distaff song selection came together smoothly and without the unwieldy necessity of actually reading Lethal Seduction by using the simple theory that all romance novels are exactly the same. This realization was also private. Bruce and I greatly enjoyed the gently subversive process of getting Rhino Records to make the compilation as gay as humanly possible! Making matters somewhat easier was having Jackie’s full support, for, as it turns out, the only difference between a rich English romance novelist and two gay Jewish men from New York turned out to be three yards of good leopard print. The final track list included Blondie’s Rip Her To Shreds, Tina Turner’s Sexy Ida Part 1, Sister Sledge’s He’s The Greatest Dancer, Swing Out Sister’s Am I The Same Girl, Dusty Springfield’s You Don’t Have To Say You Love Me, and, the piece de resistance, Eartha Kitt’s Where Is My Man?  Snap!  But still Bruce and I felt compelled to somehow go further, meaning gayer.

That’s when Bruce hit pay-dirt. An original song! He went back to the label and somehow got approval (and money) to record what became our homo coup de grace, the purposely pretentiously titled Lethal Seduction/Dangerous Kiss Suite.  This musical mash-up, which consists of Collins reading salacious excerpts from not one but two of her novels over a grinding, hypnotic, synth-washed dance track while singers Clark Anderson and Ellen’s Joley Fisher (daughter of Connie Stevens and Eddie Fisher) sang “this kiss could be dangerous/this kiss could be overwhelming” so many times that the listener finally can’t imagine that any kiss could be as dangerous or overwhelming as this song! Gay enough for you now? We were thrilled with the finished 5:32-second track, which, when listened to repeatedly, produced an almost vertiginous effect, completely chaotic — the sonic equivalent of having the cast of RuPaul’s Drag Race driving bumper cars and doing poppers simultaneously.

The fun we had making the CD was a sharp contrast to the cold, indifferent response the project met with upon its release.  To say the sales were tepid would be an exaggeration by half and the Rhino suits made matters worse with their mysterious decision not to release the Lethal Seduction/Dangerous Kiss Suite as a single. Hmm. Perhaps the sudden prevalence of boy bands like the Backstreet Boys had made the musical landscape less hospitable to a 5:32-second, spoken-word medley, but the complete lack of interest in the project at least saved us from the unseemly round of finger pointing that usually accompanies the failure of a major record.

But fortunately for us all, thanks to the magic of the Internet, I am pleased to rescue the Lethal Seduction/Dangerous Kiss Suite from its eternal, ignominious relegation to something even more obscure than a pink wedge Trivial Pursuit question, by making it available to you here.  But be careful, my darlings, for this kiss can be overwhelming!

Oh, and before I forget, when you finish listening take a minute to tell me what you think!  Is the Lethal Seduction/Dangerous Kiss Suite the Gayest Song of All Time?

P.S.Incidentally, Jackie had a terrific sense of humor—she blogged that this piece was “hilarious”—our first celebrity endorsement.

Interview with Do I Sound Gay? Director David Thorpe

A Gay Man’s Guide to the 11 Best Songs to Listen to While Dusting: The 1970s Edition

Portrait of Jackie Collins by Alvaro:

ALVARO IS A WORLD-RENOWNED ARTIST CELEBRATED FOR HIS PORTRAITS AND ILLUSTRATIONS OF THE ICONS OF FILM, MUSIC, AND POP CULTURE, AS WELL AS HIS “GIRLS”—THE SUPER MODELS. A TRUE NEW YORKER, BORN IN BROOKLYN AND RAISED IN THE SOUTH BRONX, ALVARO’S WORK IS DISTINCTIVE FOR PROJECTING A CONTEMPORARY STREETWISE SENSIBILITY WHILE SIMULTANEOUSLY EVOKING THE TIMELESS GLAMOUR OF CLASSIC HOLLYWOOD. 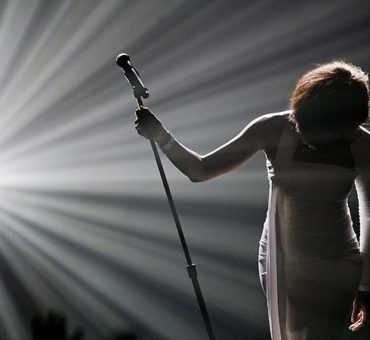 What Really Killed Whitney Houston? On the Mainstream Media's Cover-up of the Star's Sexuality: "The Greatest Love of All" 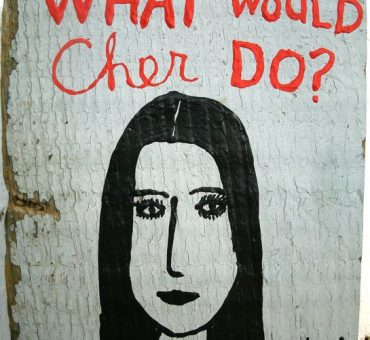 Straight Acting: It's Fine to be Gay as Long as You Act Like a Guy, or "What Would Cher Do?"