Frequent Stargayzing contributor Corinna Tormley and David Munk each share there thoughts on the historic performance.

I love Judy and I love Barbra and so was very aware of the show’s existence for years. I once saw a VHS copy in a shop, but it was NTSC – North American region. I needed PAL, the European region. Heart. Broken. Years later I finally got it on DVD; pure, crisp, clear, like they’re in the same room-quality DVD.  I obviously knew that the show would have an affect on me—my two top divas in the same space. I had read that Babs was cool and that Judy clung on to her, terrified. Babs was surprised at the time but understood later, as she got older, what Judy was feeling.

Apparently, it was Judy’s idea to slow down her Harold Arlen Summer Stock standard “Get Happy” and merge it with Babs’ ballad version of “Happy Days Are Here Again.”  I knew all of this.  But I had absolutely no idea what impact seeing this show would have on me. From the first moments when Babs awkwardly stands next to Judy during the clunky introductory song and does her bad English accent (and Judy her bad—what, Brooklynese?), I was GOT. By the time Ethel Merman shows up, demanding she get to belt with the two of them, Babs’ face seems to betray her feelings of absurdity at the situation she finds herself in. Three legends collide to sing “There’s No Business Like Show Business” and Streisand marks the occasion with her best comic performance and kooky gurning. But I’m getting ahead of myself, as what happens before the invasion of The Merm is what can only be described as Literally Television Gold.

Barbra’s solo numbers are some of her best performance-captured-on-film moments. Breathtaking. Flawless. But those duets; I was not prepared, not ready for the profundity of those moments. And that is no exaggeration. Every single person I have ever shown that footage to had quite a similar reaction. They fall, for both of them. They are often surprised at how funky and modern Babs comes across compared to Judy’s classic, mannered moves. The loving, supportive chemistry between these two women gets into their soul. The “Get Happy/”Happy Days” mashup blows them clear away.

I love watching it with other people, and I love watching them watch it. And I can watch this number time and time again and with each and every single viewing I am overwhelmed. It is happiness, pure utter happiness in the form of outstanding talent colliding. The little moments and interactions between them, the bits of business and generosity, are touching and delicious. Each of their performances enhances the other, encouraging a sweet competition. All of this makes The Judy Garland Show featuring Barbra Streisand the best television that has ever been produced. There has been and could never be anything that comes close to this, let alone surpass it. I don’t think the world could cope with such a thing.

I echo Dr. Tomrley’s sentiments in that I had read extensively about this show and, for that matter, every other thing Streisand had done prior to 1973, long before I was able to actually experience it (1973 was the year I became aware of her myself, so that was the point I was working back from; approximately the ten years covered in Barbra: The First Decade by James Spada, which was like a religious text to me).   I enjoy explaining to my younger friends the peculiar pleasures of the pre-digital era, when you had to, you know, wait.  I had read about classic films, but I had to wait until they showed up on TV and some just never did.  It made things very frustrating for the young and curious like myself, but also created tremendous excitement when I’d finally be rewarded with the availability of something.

“In pop culture terms, I think the Garland/Streisand musical moment remains a persuasive argument for checking the rearview mirror as we hit the accelerator.”

I first became familiar with the Garland/Streisand duets on bootleg vinyl around 1979—I know, it seems very rock ‘n roll, but there were actually Streisand bootlegs out there, though hard to find (especially for teenagers in the suburbs).  Long before I ever saw the footage (these amazing shows were not, as a rule, rebroadcast years after they were aired), I would listen to them on vinyl.  Even with no visuals, Streisand’s guest shot on The Judy Garland Show was rather mind-blowing.

Personally I’ve always preferred the “Hooray For Love” medley to the “Get Happy”/”Happy Days” juxtaposition.  As Seth Rudetsky perspicaciously points out in his YouTube deconstruction of this performance, the “Get Happy” duet is very low in Judy’s register and she doesn’t really get much to do until the last few lines.  But the other duet?  Sublime.  I sometimes think about it when there are contemporary “event” duets, like Britney Spears and Madonna’s snoozefest “Me Against the Music,” Rihanna and Shakira’s unmemorable “Can’t Remember to Forget You,” (so unmemorable, in fact, that I had to look it up to remember its name—and it only came out a few months ago).  Aside from being rather crappy songs, they utterly lack vocal dynamics and suffer from the scourge of excessive digital processing.  As I’m fond of saying, they sound like what I imagine a cash register would sound like if it could sing.  But I digress.

I saw this episode of the Judy Garland show for the first time around 1982 at the Museum of Television and Radio (now the Paley Center for Media).  It was just as VHS tapes were becoming popular, but I don’t think CBS had released the Garland episodes at that point.  It was very exciting: you could go to the Museum and ask for almost any show and then go watch it with headphones.  I wonder if YouTube and the overall ubiquity of, well, everything, has made that feature of the museum smaller than it used to be. 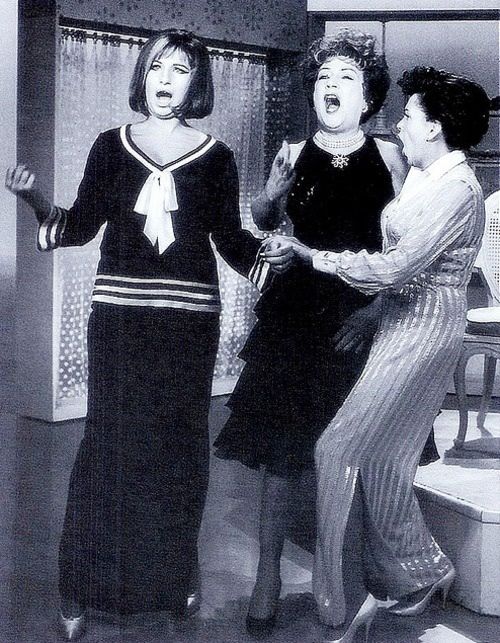 I made the drawing you see here when I was living in Rubin Hall at N.Y.U., most likely just after I had actually seen this show for the first time.  I almost certainly taped it to my dorm room door—hence the reference to the fourth floor.  When I saw Corinna Tomrley’s painting inspired by the same TV show, I had the idea of sharing our art and memories of this musical event side by side.

I have always loved the black and white era of musical performance on TV, with studio orchestras and simple, thematic set design (or in the case of the “Hooray for Love” medley: two stools).  I wish it was still like that because with two stools there was no place to hide, no subterfuge, if you weren’t actually, you know, talented.  I believe it was Pauline Kael who first identified and wrote about Streisand’s personification of the idea of talent winning out over beauty—of her talent redefining the very meaning of what beauty is.  I have nothing against pretty people certainly, but I’m reminded here of the Joan Rivers bit from her 1982 comedy album What Becomes a (Semi) Legend Most: “God divides,” she says, “I think God divides.  If he makes you gorgeous he makes you stupid, and if he makes you rich he makes you a bow-wow.  And most of us are in the middle.”

In this torpid, torturous era of digital bloat, where style has completely subsumed substance and the only certain prerequisite for being a singer is being a “fashion icon” or being able to walk like Rihanna, the classic pop era exists as both a symbol of timeless excellence and a guidepost of quality for the future.  In particular, I think the Garland/Streisand musical moment remains a persuasive argument for checking the rearview mirror as we hit the accelerator.

Making Lists: On Collecting, the Acquisitive Personality, and Eight Things Barbra Streisand Did in 1971

The Worst Music Video of All-Time:... 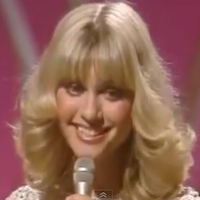 A 1978 Olivia Newton-John, ABBA, and Andy Gibb Concert in Stereo