Remember sincerity and sentiment?  I do.

If you’re under the age of thirty-five you’ll probably have to dig a bit.  Try reflecting on the death of beloved pet or the first time you fell in love, then imagine a world where you had permission to express the feelings around these things without any of the attendant embarrassment.  Try it – you’ll have nothing to be guilty of!

In the pre-dystopian 20th century, before we all got so damn hard and cynical, a fella could make like Debby Boone and say, “hey, I love you!”, or go even further, like Olivia Newton-John did and say “I love you, I honestly love you” without having to apologize with irony, the mortal enemy of sincerity, or, alternatively, calling yourself something slightly self-depracating like a corn dog.

Yes, those were the days, my friend (we thought they’d never end), before we all were fronting 24/7, we proudly embraced our inner corn dogs.  Bette Davis – she of the eponymous eyes and herself no slouch in the melodrama department – once said that she would hate to live in a world without sentiment. Luckily for her, she died in 1989, just as the culture was making its final descent into the United States of Airquotes, so she really didn’t have to.  You can take me at my word when I say if that stroke hadn’t killed Miss Davis, hearing Bruno Mars whine his way through the Nothing On You remix certainly would have!  To wit:

“If you see me at a party conversating, it doesn’t mean that numbers are exchanging….”

Well, I guess one man’s love song is another man’s typo and don’t even get me started on how the desperate, ubiquitous use of near rhymes has destroyed the artistry of lyric writing.

Speaking of desperation, I recently came across the song list and promo photos from my very first gig, which got me thinking about how much popular music and pop culture has changed in terms of sentiment and sincerity.  It was 1981.  I was a senior in high school and my dear friend and singing partner Carol Nolte arranged for us to perform for a captive audience of seniors citizens at a residential facility in South Jersey.  In retrospect, it’s a good thing that the audience was handicapped because if they had been more ambulatory they would have fled the building rather than sit through our little review of thirty-one love songs! 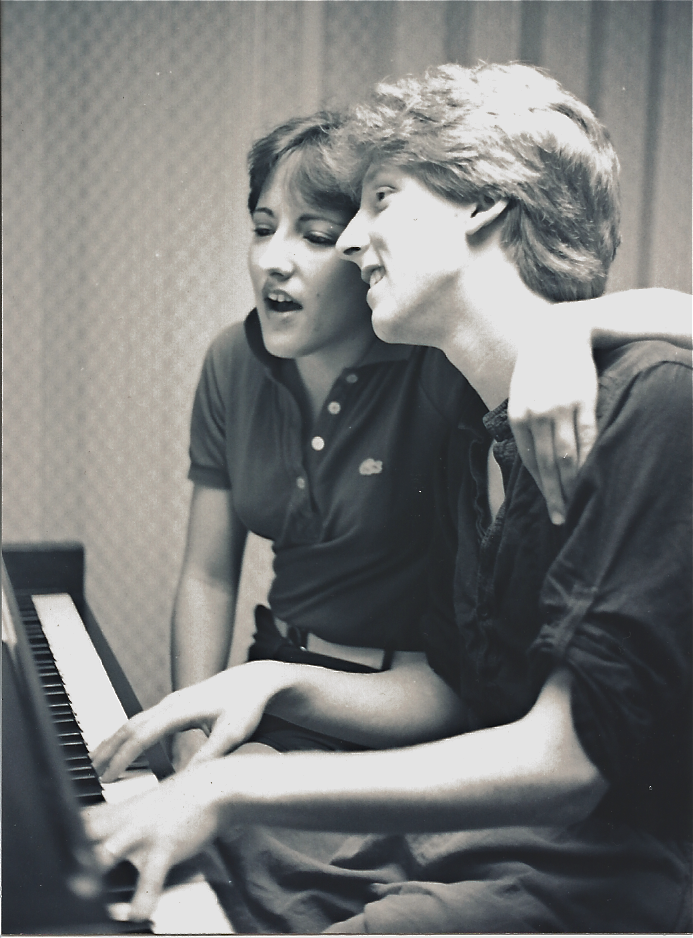 I still remember the show like it was yesterday.  We started early on account of the venue being, essentially, a nursing home.  I sat behind a small electronic keyboard and accompanied Carol through a numbing, never-ending barrage of duets and solo turns.  There was no other instrumentation and no production at all.  Now to be fair, Carol did have quite an impressive set of pipes, but me, not so much, and what I lacked in vocal skill I lacked even more as a pianist, becoming especially erratic when I had to play and sing simultaneously.  We were however, very fortunate that evening in that it was not technically possible for clumsy, repetitive accompaniment or turgid pacing to sedate a crowd that by all appearances seemed to be pre-medictated, senile or asleep.

The song list was as sincere and sentimental a playlist as anyone could have compiled in 1981 and included many of the most popular ballads and adult contemporary songs of the period.  Now mind you, though these were, individually, very well-crafted and top shelf songs, grouped as an evening of music, our recital resembled nothing as much as a brutal thirty-one song Middle of the Road car crash on the Jersey Turnpike, leaving bits of Streisand, David Foster, Carole Bayer Sager and my future boss Bruce Roberts strewn all over the highway.

But oh, like Judy at Carnegie Hall, we “stayed all night and we sang ’em all”!  Who can forget the Theme from Ice Castles (Though The Eyes of Love)?  If that’s not your cup of tea, there were other film songs, like twelve of them!  How about the themes from The Rose, Superman (Can You Read My Mind), Making Love, For Your Eyes Only, Fame (Out Here On My Own), or The Promise (I”ll Never Say Goodbye).  If we had had to pay royalties I could have put a new wing on Alan and Marilyn Bergman’s house just from this one gig!

Carol did seem to perk things up a bit when she tore into one of her signature numbers, There Are Worst Things I Could Do, from Grease, which on that evening gave a rather literal meaning to the old theater expression “eleven o’clock number”. Unfortunately for our audience, any palliative effect was dissipated by the time we lumbered through Kenny Rogers Through The Years and, after what have must actually seemed like years, finally got to Barbra’s Coming In And Out Of Your Life, three songs later.  What we lacked in nimble pacing and stage experience, we made up for with enthusiasm and our friendly between song patter, or, if you’re Bruno Mars, conversating. The show may have sucked, but it sucked sincerely, and without any trace of irony. 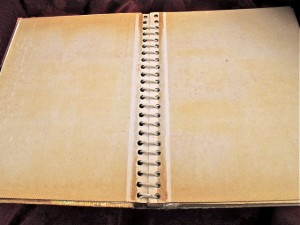 I have captured the spirit of that evening in a lovely new item which I’m featuring in my Gallery of Unusual Objets and available exclusively at my Esty store, Le Crap. I affectionately refer to this gift item as my I Can’t Fight The Feeling three-pack in tribute to the REO Speedwagon number one hit.  This lovely gift item, pictured at the top of this piece, includes two vintage photo albums from the mid 1970s that are distinctive for their cover photos which convey the vaguely spiritual and completely un-ironic vibe that was so indicative of the 1970s.

To reflect our culture’s trajectory of cynicism, I’ve paired these yellowing photo albums with a snarky fin de siecle book of song lyrics of the sort Carol and I favored but, very ironically, written out as poetry, replete with an uplifting photo on the cover for good measure.  If you are the lucky buyer, you’ll be able to read the lyrics to Sheena Easton’s Morning Train (Nine To Five), Dan Hill’s Sometimes When We Touch, the Starland Vocal Band’s Afternoon Delight and many others while you look at the photo albums and think about sincere, sentimental things, like sunsets, ducks and streams.  The photo albums are empty which will permit any customer with an iota of creativity a plethora of crafty ways to repurpose the books.

If you’re not the scrapbookin’ type, these three items look quite lovely together and can be strategically displayed anywhere in your home that would benefit from emotional nature photography and the lyrics to thirty-five of the most sentimental ballads of the last thirty years!  And really, what room wouldn’t?  It nothing else, they’ll make a great conversation piece, or, if you’re Bruno Mars, conversating piece.

And Carol dear, you will always be…my…endless…love.  I mean it.  Sincerely! 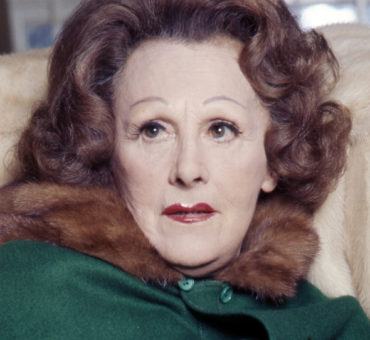 Two Outstanding Stocking Stuffers for the Meat Lovers in Your Life