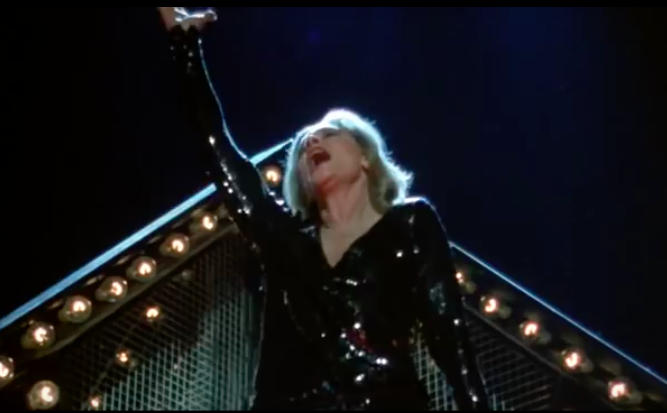 If I’ve learned one thing in the weeks since my dog Oscar passed it’s this: intense grief is no match for Lauren Bacall. Although the outpouring of condolences from both friends and strangers alike has been a tremendous comfort, the only thing that has truly pierced my veil of my sadness and produced not only smiles but full, deep, belly laughs, is Lauren Bacall’s “Hearts, Not Diamonds,” the 11 o’clock number from the 1981 film The Fan. This must explain why I’ve watched it almost every day since we lost the little guy, dragging whomever is within earshot—the willing and less so—into my favorite room in the house, the kitschen, to behold the wonder of this most compelling paean to narcissism. If music is the great healer—or, in this case, the great mirror—then Marvin Hamlisch and Tim Rice’s “Hearts, Not Diamonds” is most certainly the best medicine I have encountered. But unlike time, which moves at its own pace, Lauren Bacall in The Fan comes when you call it; all you have to do is whistle…and click.

Though Miss Bacall is, by any estimation, an icon and great star, The Fan, her last leading role is, regrettably, not one of her great moments. Paradoxically, this in no way diminishes one’s enjoyment of the film. Though still a comely, charismatic 56, Bacall could not rescue the film from its problems, which begin with its very questionable concept, a slasher/musical hybrid (a subgroup of a subgroup containing, as far as I can tell, just this one movie), and then continuing from there. Bacall plays Sally Ross, a musical theater star who might remind you immediately of Miss Bacall.  She has an abundance of luxury problems: an ex-husband she misses (James Garner), a put upon assistant (Maureen Stapleton), the stress of beginning rehearsals for a new musical (Never Say Never), and a good looking stalker who wants to kill her (Michael Biehn), you know—the usual stuff.  What Bacall/Sally Ross emphatically do not have is a workable script which, luckily for us, did not stop anyone from moving forward with either The Fan or Never Say Never.

What the film does have is terrific footage of dissipated, Ed Koch-era Manhattan, lovely Santo Loquasto sets, and the but amazing show within the film, Never Say Never, that features at least two big numbers.  The first is “A Remarkable Woman,” which we are only permitted to glimpse at rehearsal (at JoJo’s Dance Factory, the Broadway studio where yours truly studied as a teenager).  The second is the aforementioned “Hearts, Not Diamonds,” the climax of the film, which we blessfully get to see in its wretched/wonderful entirety and gives us a tremendous insight into both the texture and sound of Bacall during her Woman of the Year period.  Suffice to say it is not a soothing sound and hers is not a soft touch.

Sally Ross’s big finale, “Hearts, Not Diamonds, is intercut with the stalker’s preparations (carnation in lapel, straight razor in pocket, leaving his house, late arrival, etc.) in a feeble attempt to build tension.  This would appear to be the only reason for the killer’s breach of etiquette (and logic).  I mean, If you were obsessed with Sally Ross would you miss the whole show getting ready?  Why didn’t he start earlier?  What the director Ed Bianchi fails to realize is that the tension of Sally Ross’s impending confrontation with Michael Biehn is fractional compared to the tension of Lauren Bacall’s confrontation with Marvin Hamlisch’s song.

I should preface any further vivisection of  “Hearts, Not Diamonds” by stating unequivocally that I am a Lauren Bacall fan.  She is an icon—one of the last survivors of Hollywood’s Golden Era—who made a handful of truly memorable films.  Bacall is many things, but let’s be blunt: a singer is not one of them.  But because she is a great star, in early examples of stunt casting, she managed to win two Tony Awards for Best Actress in Musical despite possessing nothing approximating a singing voice.  In The Fan (as in life), she basically has one big note (I hesitate to call it a “power note” as that gives it too much credit), one big power move (the boys lift her up and she throws back her head while one arm shoots up), a very Halston-esque outfit (think Liza Minnelli in The Act or a Joe Eula sketch), her star charisma and, last but not least, that great head of hair, which moves much better than the rest of her (hair was never Miss Bacall’s problem, in fact, throughout her career it did much of the heavy lifting).

Mr. Garner plays her ex-husband and is so dull that he fairly disappears off the screen in his few scenes with Betty.  Maureen Stapleton is there as well and is the best thing in the movie (other than “Hearts, Not Diamonds,” of course). She plays Bacall’s put-upon secretary Belle Goldman.  In one of her best scenes she is on the phone trying to procure Betty’s special shoes.  The household is quite nervous because Bacall is about to go into rehearsal for Never Say Never, the big Broadway musical within the film that is, apparently, completely resting of Bacall’s shoulders.  I would think such an undertaking would make any star nervous, particularly one bereft of any musical talent.  Anyway, the maid is vacuuming. Maureen can’t hear over the vacuum. “Where are Miss Ross’s ‘practice shoes’?” she bellows into the mouthpiece with the full Actor’s Studio-I-need-to-finish-this-goddamn-scene-so-I-can-go-to-my-trailer-and-have-a-drink intensity we expect from her.  This maid will simply not stop vacuuming.  Stapleton is getting increasingly upset.  Finally, she get’s so frustrated at the housekeeper she hurls a coaster at her—one of the high points of the film.  Of course I also love that she calls them “practice shoes.”  In the next scene Bacall is in a studio wearing said “practice shoes,” a very gratifying transition, at least for me.

In “Heart’s, Not Diamonds” none of that happens. What does happen is that we have the very sexy aforementioned slasher, Michael Biehn, the aforementioned Art Deco-by-way-of-Fiorucci set by Santo Loquasto, lots of gay back up dancers wearing very A Chorus Line finale-ish suits, and Lauren Bacall/Sally Ross’s aforementioned black shimmering gown that looks like a Halston (though he isn’t credited). There is Betty’s aforementioned one big note, one big move, that still-great head of hair, Rice’s insipid lyrics, and an off-period Hamlisch melody that is an unbelievable ear worm anyway (Hamlisch was truly a genius; in his worst moment, which this very well may have been, he could still produce a sequined turd like “Hearts, Not Diamonds”).  Wait!  I just can’t let Tim Rice off the hook so easily.  Here is the song’s first verse:

“When the noise dies down, when the songs are sung

When the world’s caught the last bus home, when all the swings have swung

Then thoughts of hearts, and diamonds, start running through my mind

Diamonds seem to cling to me, hearts get left behind

I always chased those diamonds hoping I would shine

Hearts were not my strongest suit, so you were never mine…”

Bacall/Sally Ross has clearly made tremendous sacrifices for her career and her public.  Rice’s lyric is full of the kind of narcissistic show biz tropes that make it a moving target for satire, except the whole show within a show comes pre-satirized so you don’t have to do a thing but sit back, relax, and let the shitstorm of schmaltz rain down.  Bacall’s vocal attack on the word “mine” at the end of the first verse, a cross between the fog horn and the sound one might hear in the middle of the night on safari in Africa, is worth the price of a mezzanine ticket to Never Say Never in and of itself.  There’s no time for sadness anymore—it has even helped me to get over such a personal loss—because with “Hearts, Not Diamonds,” we’re all sitting tenth row center.

“And in The Center of it All!” All Singing, All Dancing Commercials for the Milford Plaza and Hotel Seville, circa 1980