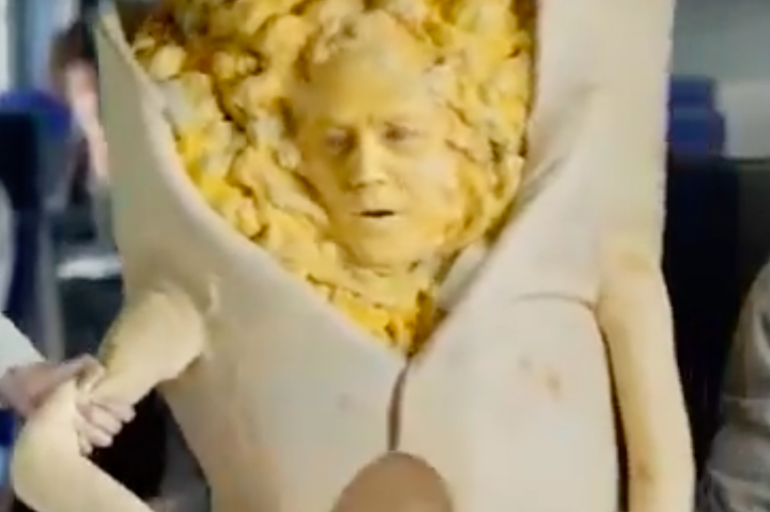 Not long ago, I had an audition for Orbit chewing gum. I was being seen for the part of a falafel and, as I came to learn later, also a burrito. Confused? Yeah, I was too, but I figured I was okay because I was a half-hour early, a precaution I take in anticipation of just this sort of thing. I had no way of knowing that I was about to experience the audition from hell.

After signing in with a curt older woman who vaguely reminded me of Cruella de Vil from 101 Dalmations, I read the script carefully but didn’t understand the copy. I re-read the script. I still did not understand. This is never a good thing. With trepidation, I approached Miss de Vil for clarification.

ME:  (kindly)  Excuse me. So the set-up is that a man is on a subway car sitting next to a piece of falafel?

ME: Okay, right, but then why does the falafel start singing “We Built This City?”

CRUELLA: (irritated) Are you asking me about motivation?

ME: Not in the Actor’s Studio sense, it’s just that conceptually I’m lost and–

CRUELLA: There’s not much to get, you’re a piece of falafel and you interrupt the man sitting next to you with the song.

This woman scared me, so I gave up for the moment and went back to my seat. I wasn’t worried about singing “We Built This City,” which, naturally, I know by heart, but there was also the matter of the second script, the one with a burrito–also on a train– that gives a big speech. I paused for a few moments to consider whether I seemed more like one than the other. I decided that neither a burrito nor a falafel was optimal casting for me. Though she didn’t seem very eager to be helpful, I decided to ask again, but even more cautiously.

ME: I’m so sorry to trouble you again, I know you’re very busy–but I’m still just a bit confused. Am I a falafel or a burrito?

CRUELLA: Everyone is reading for both parts.

ME: (relieved, playfully)  Well, now, of course it makes sense to me, thank you. I’m a falafel giving a speech and a burrito singing that great old song by Starship.

CRUELLA:  (disgusted)  No Mr. Munk, the burrito has the speech and the falafel sings.

I walked back to my chair and settled in to study the two scripts, my anxiety mitigated by the fact that I still had twenty minutes to pull it together. It did occur to me that though I knew I was reading for both the falafel and the burrito, I still didn’t connect what any of this had to do with gum. “Why isn’t there a giant piece of gum on the train?” I wondered. Putting that question out my head, I began to read script one: “A MAN SITS ON A TRAIN READING A MAGAZINE. HE IS SEATED NEXT TO A GIANT FALAFEL” when I heard…

Despite having arrived thirty minutes early, when I rose to go in I was completely unprepared. I shook off my fear and frustration with a smile as I walked into the room and greeted the casting director, who looked like your favorite uncle but, as I immediately discovered, lacked your favorite uncle’s affable demeanor.

CASTING DIRECTOR: So you understand the concept here?

CASTING DIRECTOR:  Other way around. I’ll explain: You are bad breath and you’re sitting next to the guy who ate you on a train. You’re annoying him and everyone because that’s what bad breath does. It annoys. Now when you’re the falafel you annoy by singing “We Built This City,” but when you’re doing the burrito speech, you can annoy him with this.

At this point, he handed me one of these: 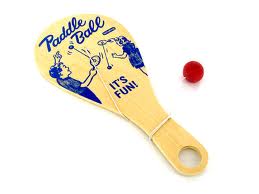 I gasped audibly at the sight of an old nemesis–it was the Paddle Ball–returned from my childhood to bedevil me once more! I hadn’t gone near this toy since at least 1973 because I had traumatic memories trying to command the tiny red ball to make contact with what always seemed to me like a popsicle stick. Then there was the ever-present threat of injury to the eyes. Despite the bold directive “It’s Fun!” printed right on the paddle, this toy had always made me sad.

ME: (to the toy on the chair)  Hello old friend! Why I haven’t seen you since nineteen…

I stopped mid-sentence because I remembered that the casting was for men in their early- to mid-thirties. I was nearing fifty and if I finished the year with “seventy-three” I would expose myself both as a lying actor and an old burrito. The only thing I do worse than racket sports is math and in that terrible state of anxiety, I couldn’t even begin to compute what year I’d last seen my “old friend.” But how to finish the sentence?

ME: (beginning to panic)

Forgive me, I’m a little out of my depths here. You want me to read the burrito speech at the same time I play Paddle Ball?

CASTING DIRECTOR: Yeah, but don’t worry if you don’t hit it every time, you’re just doing it to show how annoying bad breath is.

ME:  It certainly is.

I slated my name and began. As anticipated, the ball never hit the piece of wood — not even once — and the challenge of this endeavor made it utterly impossible for me read the dialogue I didn’t have a chance to prepare in the first place. Within seconds I couldn’t even remember if I was the falafel or the burrito. I tried to speak but nothing came out, just an assortment of little grunts and moans as the ball flew around and around the paddle, never making contact but somehow gaining speed. Every few seconds my eyes would dart to the cue cards in a frantic attempt to grab a bit of text while avoiding the ball, which appeared to orbit me with comet-like intensity.

Moments later, as my fumbling for lines and pathetic striving for Paddle Ball contact reached a crescendo, there was a series of sharp, snapping sounds; the ball flew off the elastic, ricocheted off the wall and beamed the door like a missile, most certainly in a desperate attempt to get out of the room and away from the horror of this audition. As the red ball careened around the room, I leaned back and covered my eyes with one arm while still holding the paddle high in the air with my other arm, like a gay Statue of Liberty held at gunpoint screaming, “Don’t shoot!”

Suddenly there was silence. Though I was jealous of the ball’s ability to disappear and wanted nothing more than to follow it to wherever it was hiding, I regained my composure, rose to my full height and looked directly into the camera.

ME: (deadpan)  If you think about it, is there anything sadder than an old burrito whose missing a ball?

Silence. I doubt the casting director got past his disgust that a grown man could not make the ball hit the paddle even one time. The rest of the audition was a blur. I’m sure I sang “We Built This City” with Grace Slick-like precision but, mercifully, at some point, it ended and I was released. I hurried past Cruella de Vil and a room now full of men in their early thirties who would, no doubt, easily hit the ball on the paddle when they were a burrito and belt out the Starship song when they were a piece of falafel. Or was it the other way around?

This piece was also featured in the Huffington Post.

“Peas and Carrots”: A Behind-The-Scenes Look at FX’s New Show “The Americans”: or, How to Survive Being an Extra on the Graveyard Shift

The Whine Heard Round the World! An... 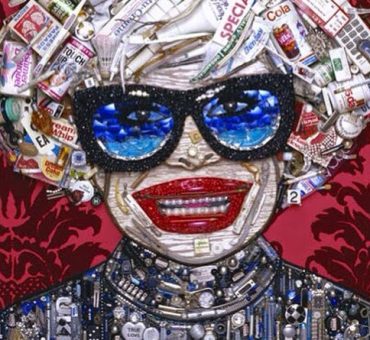