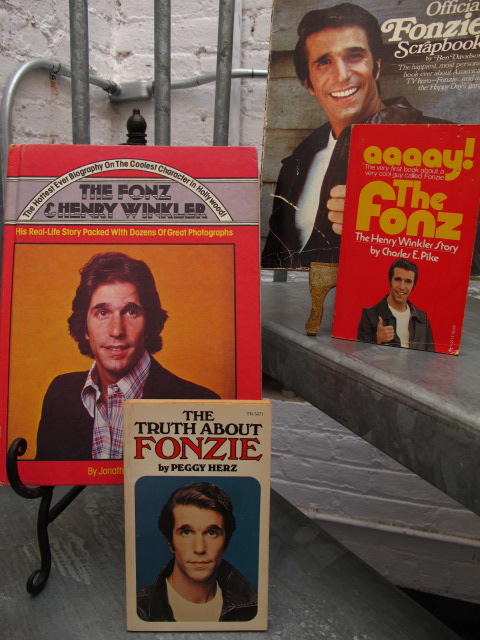 It is with great humility and a certain degree of shame that I admit I own not one, not two or three, but four books about “The Fonz” and Henry Winkler (including one called The Fonz and Henry Winkler).  I have been moving these four books from place to place for thirty years, from uptown to downtown, Brooklyn to Jersey, Manhattan to L.A. and—the strangest part—I didn’t even know it!  I mean, I knew I had maybe one book about Fonzie somewhere, but when I started putting together my Etsy store I was chagrined as the number of Fonzie books kept climbing.  I’m ready to let go now, it’s time for someone else to have them.

I am pretty sure that The Truth About Fonzie, in addition to being the finest book about Fonzie ever written, is the original book that got my collection started.  I bought it in fifth grade when Happy Days was the number one show in the country and the notion of reading a book about Henry Winkler may not have seemed as eccentric as it does today.  The debut of Grease on Broadway and release of George Lucas’ American Graffiti in the early 1970s, had kick started a 1950s revival that was in full swing by the time Happy Days debuted, and lasted throughout the decade.  This wave of nostalgia included all kinds of great things like Neil Sedaka’s comeback, The Lords of Flatbush (which also starred Winkler), Cher’s Broadway debut in Come Back To The Five And Dime Jimmy Dean, Jimmy Dean and, of course, Randall Kleiser’s 1978 Grease, the highest grossing musical film ever.

Henry Winkler was the breakout star of the show and his character Fonzie was the embodiment of cool, becoming so popular that Fonzi-isms like “sit on it and it and rotate” and especially “Aaaay” became popular catch phrases of the day.  Winkler’s natural warmth imbued Fonzie’s leather jacket toughness with a huge dollop of family-friendly accessibility.  If only my own tormentors had been similarly inclined.

Happy Days’ success spawned a merchandising juggernaut (currently being revisited in a lawsuit by many of the cast members over royalties, though not Winkler or Ron Howard). The Fonzie doll, which I never did own, was memorable because it featured the vaguely sexual “thumbs up action”, which may have explained my fixation.  In fact, I so idolized Fonzie in fifth grade that a girl I did not particularly like named Beth Nenninger was able to buy my friendship that year by perpetuating the lie that Winkler was her cousin and she was going to arrange for me to meet him (even as a child I was starstruck).  As the year wore on, her excuses seemed more desperate and less plausible and I reluctantly came to believe that I was a victim of a con, a deceit cooked up by a very unhappy young lady and would not be meeting Fonzie.  Instead, I proceeded to do the only logical thing: foment a resentment toward Beth Nenninger that I have been carrying around as long as these books. 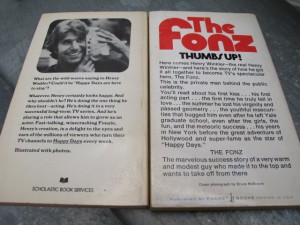 Happy Days ran for years.  Too many years.  Winkler was probably thirty when he got cast and the years began to show on him toward the end when the thought of he and the other cast members still being in high school became a bit surreal.  In fact, if you ever wondered where the expression “jumping the shark” came from, you need look no further than the episode where Fonzie goes water skiing (with his leather jacket on, I believe).  The sight of the older looking actor, once the embodiment of cool on water skis became a metaphor for something that once had value becoming camp.

For some reason, a Henry Winkler anecdote that you, dear reader, would certainly find within one of these tomes, has stayed with me for forty years. Winkler, a New York-based actor who moved out to Los Angeles in the years before the hit show to try and fast track his career, describes the desultory feeling of isolation in a strange city, “I felt that I had made a three thousand mile mistake with my life.”  I have thought about that phrase every time I’ve moved out to L.A. and back again.  No doubt, my moves would have been exponentially lighter if I had divested myself of these four books years ago, but now, you have a very unique opportunity to own The Official Fonzie Scrapbook, The Truth About Fonzie, The Fonz and Henry Winkler and Aaay, The Fonz! at a very reasonable price!  I can also reassure you, that each of these books is what might be deemed a “light read” – nothing too taxing and, certainly, no pesky big words to look up.  Remember Christmas is just around the corner!

You've Got to be Carefully Taught: "The Wizard of Oz" Tutorial for Youngsters