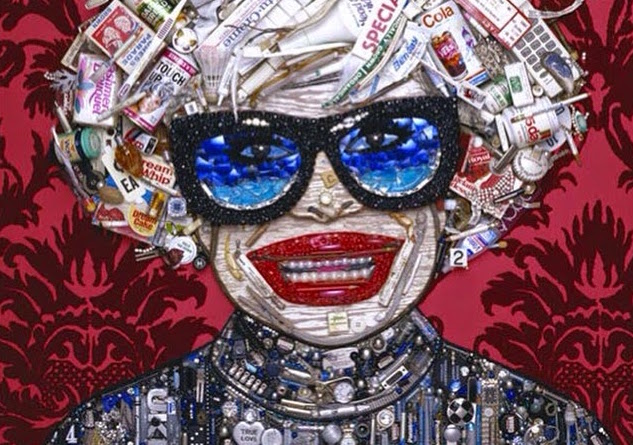 Oh Carol!  Neil Sedaka may have been singing about Carole King in his top ten hit from 1959, but he might has well been singing about everybody’s favorite eternal chorine, Carol Channing.  Betty White isn’t the only ninety-year old entertainer out there kicking up her heels. New Yorkers and theater folks probably already know that our own Broadway baby, Miss Carol Channing, who turned ninety-two last month, has a brand new documentary, Carol Channing: Larger Than Life which premiered at the Tribeca Film Festival, opening soon at a theatre near you (that is, if you live a city like New York.)

In 2011, busy Carol also released a new album of spiritual songs, For Heaven’s Sake, which was devoted to saving the Arts in schools.  I know for a fact it sold at least one copy and proudly admit that I listen to it often when i’m feeling blue.  How can her version of Ezekiel Saw De Wheel not turn your day around?  (Her version of Housework, a comic soliloquy railing against proscribed women’s sex roles from Marlo Thomas’ groundbreaking 1972  Free To Be You and Me project had much the same effect on me when I was nine.  Ironically, I would listen to it while I folded the laundry).

The fact that the album primarily contains what used to be known as “negro spirituals” will continue to feed the rumors that Channing is bi-racial, a fact she has, to the best of my knowledge, never confirmed officially.  Carol managed to obfuscate this point even further last year when asked directly by Wendy William’s who interviewed her to support the new CD. If you’re gay or in the Broadway world, (fairly redundant, I know), I couldn’t blame you at this point if you recalled the 2004 Tony Awards when Miss Channing and L.L. Cool J rapped about “keepin’ it poppin” while Carol gamely threw down some gang signs. It was, fairly surreal, I know, but as this circa 1970 number from Laugh-In reveals, Channing has been toying with our confusion about her race for years.  Here is Carol and the stunning Teresa Graves with “Soul Sister.”

Before I share Carol’s German Pot Roast recipe, I have to share THE STORY, which I am praying is either confirmed or denied in the documentary, but i’m not holding my breath, because it’s scatological.  Trust me kids, I would gladly ask her myself but sadly, I’ve never met her personally, though she did know my old boss Denise Rich well enough to send her this lovely note:

So anyway, here’s THE STORY:  It’s so widely retold that I have overheard several versions of it, but here is the version I learned when I was young.  Carol was somewhere doing Hello Dolly!, which can place the story anywhere from 1964 till last Tuesday.  She went into the ladies room and into a stall.  After a few minutes, Carol’s inimitable voice was loudly heard to remark (use Carol Channing voice here): “Corn?  I don’t remember eating corn!”  Flush.  Different versions of the story have her still wearing a body mic and the sound going out into the auditorium.  Another version I heard a man tell his table at Joe Allen’s one night simplified the punch line to, “I don’t remember corn!”.  For Heaven’s Sake, Carol, forget about arts in the schools and let’s just get to the bottom of the corn thing, because given the immutable reality of the numbers, I am seriously beginning to worry that you are going to take the veracity of this urban legend to your grave, along with the truth about whether you actually were a soul sista!

Speaking of time,  (and, let’s face it, there is no better time than after the corn story), let’s talk pot roast.  I obtained this recipe from a very good source and I hope that you will all let me know if it is any good.  As you know, I don’t cook these recipes, I just propagate them.

2 tsps. mixed pickling spices (i’m not sure what these are, you can google it)

Day One: Rub meat with salt, ginger and cut garlic.  Place in large bowl.  Combine remaining ingredients except fat and ginger snaps in sauce pan.  Bring to a boil and pour over meat.  Cool, cover tightly and place in refrigerator overnight.

Day Two:  Remove meat and reserve the marinade.  Dry meat with paper towel.  Heat fat in a heavy skillet until it is sizzling.  Sear the meat on all sides.  Transfer meat to Dutch oven or deep, heavy skillet.  Add 1 1/4 cups of marinade.  Cover tightly, simmer on top of stove or braise in moderate oven for 3 1/2 hours, or until meat is tender.  Add more marinade as needed.  Remove meat to heated serving platter.  Strain liquid in pot and return to heat.  Skim off excess fat.  Thicken with ginger snaps and season to taste with salt and pepper.  Reduce gravy slightly, stirring constantly over low heat.  Slice meat diagonally and serve alone or with side dishes of gravy and new potatoes cooked in their jackets or potato dumplings or noodles.

NOTE:  Carol’s pot roast works well in a crock pot!  Sear meat first as directed in recipe, then cook in crock pot at low oven temperature for 6-8 hours.  Her dish is an old-fashioned delight, aromatic, delicious and memorable.  Try it during cold wintery days!  Serves 8

* About the artist:  American Artist Jason Mecier has had an interest in arts since a young age, using all sorts of materials to construct his paintings / sculptures. He came up with the idea of asking celebrities for their unwanted items, in exchange for a painting. It soon caught on and as you can see below, he was very successful. He works with all sorts of materials for his art, this is how he classifies them: Beans, Candy, Food, Junk, Yarn and Miscellaneous. Mecier says that his artwork can take from 50 hours for the simpler ones to 2 months of solid work for the more complex. Contact: designstack.co

Eating With the Stars: Tony... 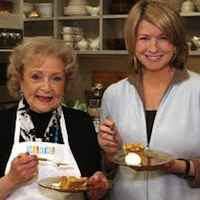 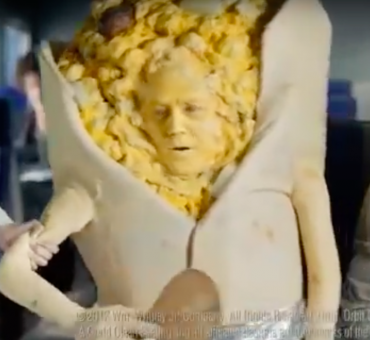 My Worst Audition Ever? Or, The Danger of Playing Paddle Ball, Chewing Gum and Singing "We Built This City" Simultaneously