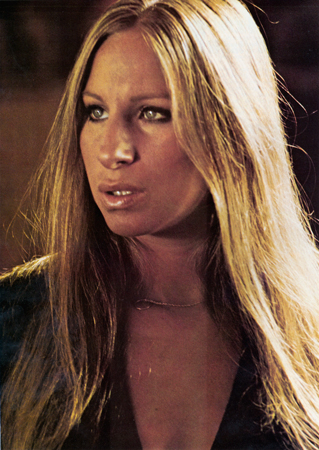 “I don’t know much about what Barbra Streisand did in 1971.”

So began my first attempt at “serious” writing—in 1973.  I was a nine-year-old kid who was determined to write a biography about a subject with whom I had already invested considerable thought: Barbra Streisand.  Having recently become rather fixated on the iconic “actress who sings,” it was not enough for me to simply enjoy her work.  Even at nine, I was in full possession of a particular sort of grandiosity that necessitated I be an authority on the subject, hence my first attempt at writing a book.

I decided, rather logically I think, to take a chronological approach to the information.  My research consisted mostly of taking James Spada’s book Barbra: The First Decade and reordering the information in a style for the gay boys under the age of ten set.  With this structure I had done rather nicely through those heady mid-to-late-sixties years, which included her spectacular, Emmy-winning TV specials (whose soundtracks I owned, but had never seen) and early film triumph in Funny Girl (ditto).  I ran into a problem, however, when I got to 1971: Barbra didn’t do anything, at least as far as I could tell.  Of course, there was no Internet and Spada’s book, which didn’t say much about 1971, was the only reference on the subject I possessed.  I was stuck.

According to the book, there was a weird gap between The Owl and the Pussycat in 1970 and What’s Up, Doc? in 1972.  I became quite agitated.  Completely unaware of microfilm, and still unable to move from annotation to critical thought, my nine-year-old attention span began to sputter.  I soon determined that her missing year, as well as my intended book’s seeming total dependence on Barbra: The First Decade, rendered the project unwieldy and not nearly as much fun as listening to Simply Streisand while “redecorating” my bedroom (this consisted of moving the furniture around my small room, but being very feng shui-forward, it was a task to which I ascribed great significance).

I thus moved on to my next idea: an exhaustive inventory of every arch-villian who appeared on Batman.  This more manageable project only required daily viewing of the then-syndicated kitsch-fest — which I did anyway — and some brief notations that looked something like this:

This sequence of events laid the groundwork for my future attempts at creative writing: over thirty years of relentless list making.  My attempts ranged from the mundane (Names of Boys) to the illustrated (Girls’ Contemporary Hairstyles: page-boy, flip, shag, Dorothy Hamill wedge, Toni Tennille bowl cut, etc.).  I listed famous singers; friends’ pets; movies I’d seen; license plates spotted on family trips; kids in the neighborhood (Jenny Wright, Todd Freneaux, Ruth Shladovsky); stores on Route 18 (Woolco, Newberry’s, Two Guys, The Mill End Shop, Mickey’s Donuts); what I might want to be when I grew up (singer, actor, director, fashion designer, personal secretary to Barbra Streisand); what my brother Jonathan wanted to be when he grew up (herpetologist, garbage man, meteorologist, cashier in a barber shop); and so on.  In 1977, when I was twelve, The Book of Lists was published and I, not surprisingly, enjoyed it immensely though I was irritated that I hadn’t come up with the concept before Amy Wallace, David Wallechinsky, and Irving Wallace—again, a list!

In my teen years I took a break from list making and began collecting objects, a three-dimensional expression of the same psychological inclination.  Records, posters, books and magazines became my passion, later to be replaced by CDs, DVDs and, now, mp3 files.  My list making would become more pedestrian, easing into the familiar repetition of t0-do lists, shopping lists, Christmas lists, birthday lists, and movies to see; lists that we all rely on to be efficient.

Now with Stargayzing, I’ve found the ultimate repository for my acquisitive tendencies and list-making predilections and the very best part is that I get to share all my lists with you.  Still, as I write this list of my lists, I wonder how much sooner I might have gotten to serious writing if I had just been able to find out if Barbra had done anything at all in 1971.*

* Here is a list of Eight Things Barbra Streisand Did in 1971 (many thanks to Matt Howe’s superb Barbra Archives for the information):