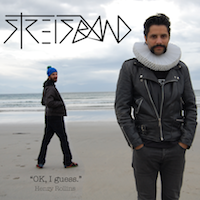 Now here is something rather unexpected: an English speed metal cover band devoted exclusively to the catalogue of Barbra Streisand.  My only comment is, “What took so long?”  The StreisBAND project, which comes with a really cool Def Leppard-style logo, is the brain child of Stephen Crowe, an English opera composer, performance artist and, obviously, major Barbra Streisand fan.  Crowe handles the vocals and is joined on drums by compatriot Barry English and the result might be described as a good natured, homo-agro sound blast of scorched earth Streisand.  Though clearly adoring of Barbra, StreisBAND’s approach is humorous in its total subversion of the singer’s legendary perfectionism and need for control.   I first became aware of the project when a mutual friend, Stargayzing guest columnist Corinna Tomrley sent me their cover of Cole Porter’s “Come to the Supermarket in Old Peking,” which was a highlight of Streisand’s first album back in 1963.  I soon discovered via his website stephencroweopera.org, that Crowe had already recorded several other Streisand tunes, including “Woman in Love,” “The Way We Were,” and “Gotta Move,” one more bizarre than the next—and all in good fun.

Duly impressed, Stephen and I struck up and Internet correspondence.  I offered to help him in any way I could and because I am still, in my heart and brain, an A&R person, I sent him some song ideas to cover.  Imagine my surprise and delight when a twitter message arrived from Crowe a few weeks later with his sublime and thoroughly crazy cover of “Piano Practicing,” a somewhat obscure patter song from the 1973 TV Special Barbra Streisand and Other Musical Instruments, that I had suggested would lend itself particularly well to the StreisBAND treatment.  Stephen’s artistic success with my idea confirms the nasty secret that dwells in the hearts of all A&R men past and present: that the world would be a better place if you only listen to me.  The fact that social media has made everyone think they’re an expert in everything makes people like me who actually are—or were—go homo-agro.  But I digress.

“Piano Practicing” was written by Lan O’kun, who had contributed other Streisand songs over the years, such as the lyrics to Color Me Barbra’s “The Minute Waltz.”  It was a favorite of mine since I first heard it as a nine-year-old kid and Crowe’s cover really brings to life the vision I had in my head.  If you’re anything like me—and if you read Stargayzing regularly you certainly are—there is a perverse pleasure in hearing this turbo-charged musical rant, which suggests what might happen if you combine early Streisand, two art students and an unlimited supply of crack cocaine—and aren’t we all the better for it?  Thanks to Stephen Crowe, Christmas has come early at Stargayzing.

Here is Barbra Streisand’s original version of “Piano Practicing” (originally performed as a medley with the Gershwin’s “I Got Rhythm”), followed by the StreisBAND cover version.  So what do you think?

The Son Also Rises: Jason Gould Finds His Voice. A Stargayzing Exclusive Interview, Plus the Debut of His Song “Morning Prayer!” 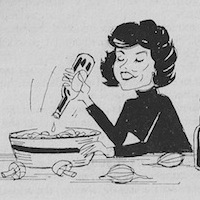 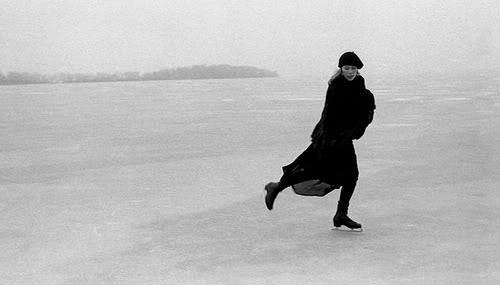