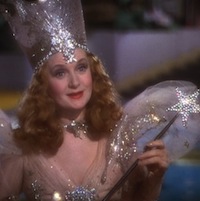 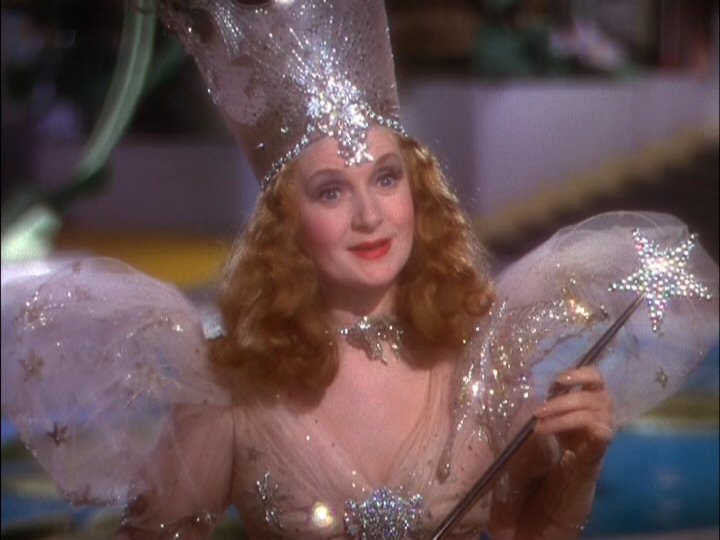 When I was a young boy I was obsessed with Billie Burke.  If you think there is something odd about a six-year-old boy fantasizing about the image of a 55-year-old woman in a film that was then over 30 years old, then you don’t read Stargayzing regularly.  To me, Burke’s Glinda was the embodiment of everything that was good, gentle, and kind, plus she was covered in glitter and travelled in a bubble!  Perfection!  Her death in 1970 was the first death of a celebrity that I can recall and I remember feeling very sad, for it was apparent to me even at the age of six that there was something extra poignant about the yearly broadcast of The Wizard of Oz that, for many generations of young people, was a sure sign that spring had arrived.

So it was with great relish that I read the great actor Frank Langella’s anecdotes about working with Billie Burke in summer stock when he was quite young in his newish book Dropped Names, which I am presently reading and recommend highly to anyone who enjoys well-written stories about the days when people were celebrities because they were legitimately excellent at something.  Langella’s Billie Burke stories are so entertaining (and—for me at least—highly relatable) that I am sharing them almost in it’s entirety after the jump. 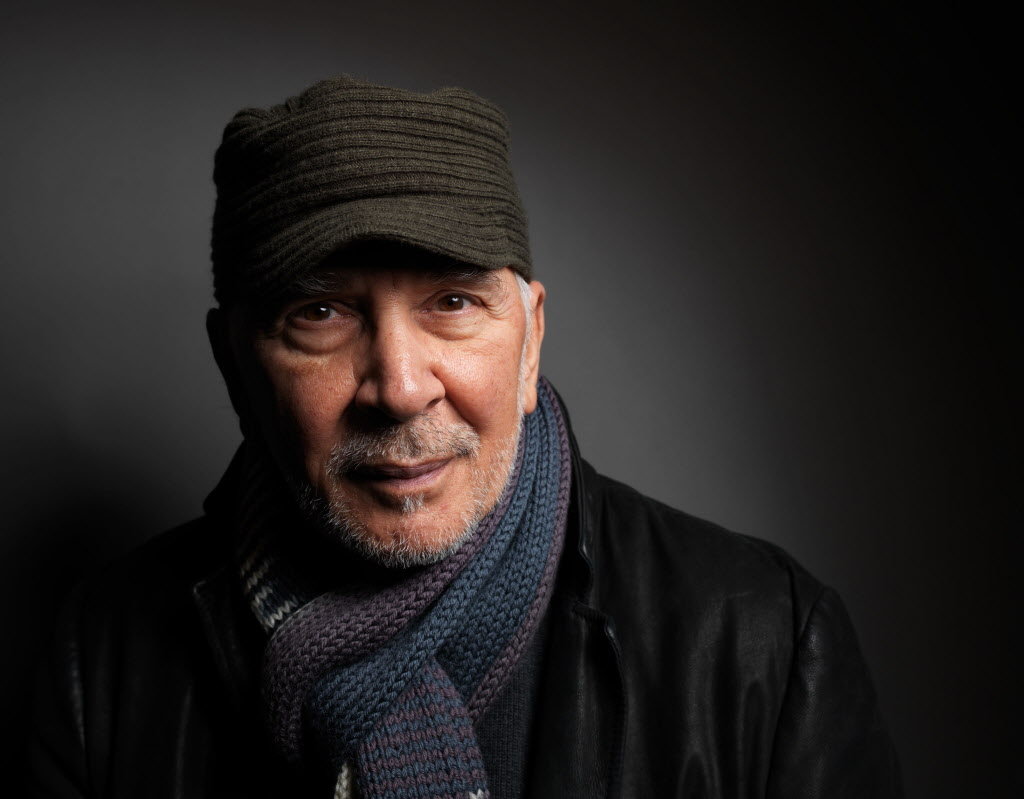 In the summer of 1956, she was touring in a lightweight comedy entitled The Solid Gold Cadillac, in which she played a woman who outsmarts the corporate guys and ends up with the money.  Some of the touring plays had parts with one or two lines in them and these roles were played by the apprentices of the various theatres.  When it got round to the Pocono Playhouse, where I was apprenticing, I was lucky enough to get not one but two bit parts.  The first was that of a reporter holding a camera.  I think I said something like “Look this way please” after first picking up Miss Burke and sitting her on a desktop.  The sceond part was the goundbreaker for me.

If you were among the chosen few to get a small role in one of the tourning productions, it was anecessary to have a quick rehearsal with that week’s star on the day of the opening night.  They would have arrived the eveing before or even early that morning from their last performance in some other state. 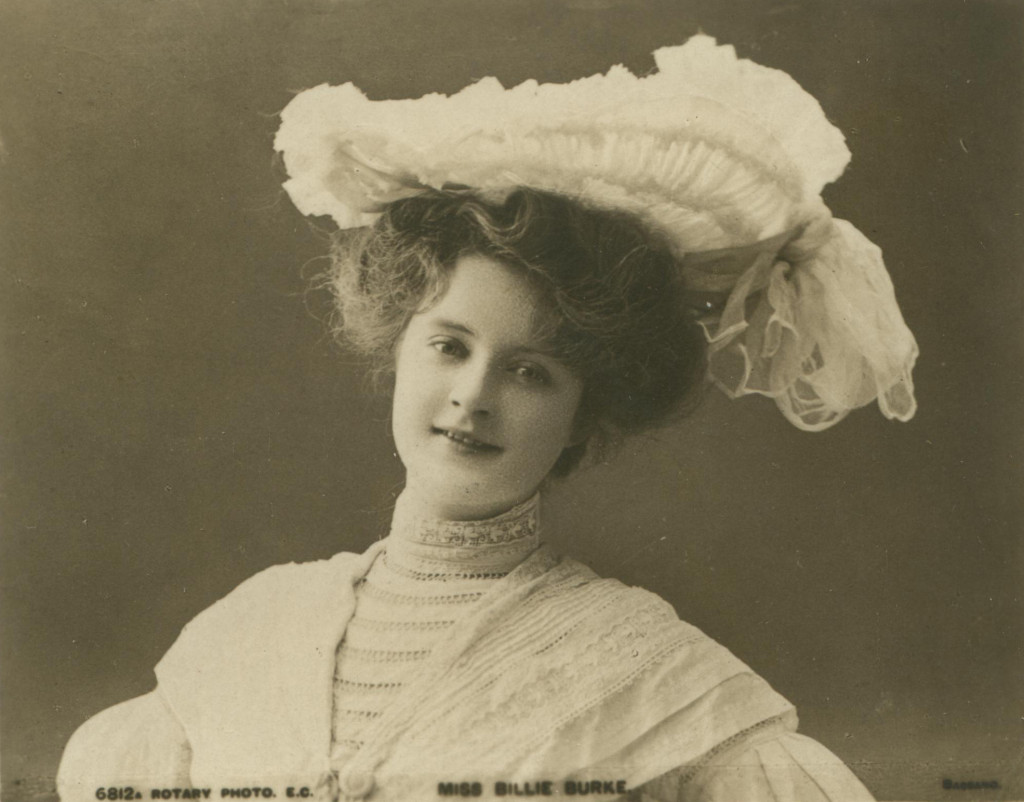 There she was, seventy-two years old, dressed in a two-piece blue suit, wearing a hat and gloves in July, coming onto the stage after we had all been pre-rehearsed.  The voice was exactly as one would have hoped, distinctively tweety.  I was instructed to lift her on her right side, and another lucky apprentice would do the same on the left.  We were then to place her on the desktop, pick up our cameras, say our one or two lines, take a photo, and leave the stage.

She stood rigidly as we approached, and as I went to lift her she said politely to the older gentleman sitting at the edge of the stage:

“Mr. Director, would you kindly tell these young men to place each of their hands under my elbows, and I will grab them to steady me as I reach the table.”  She then turned to us and said: “I’m so old, my dears, that if you’re not careful I might break.”

And that is precisely what we did for the following eight performances as this delightful woman chamred and entertained the Pocono Playhouse audiences with her particular brand of inspired silliness; as she prowled her way around the stage, missing no laughs and playing her audience.  She did, however, have one serious problem:  her bladder.  At any given moment in any performance she would suddenly exit the stage and rush to the nearest bathroom.  The rest of the company, long used to these unannounced exits, ad-libbed their way around until she came back, blithely entering with lines like: “Oh, I just met the most delightful person in the hall and stopped to chat.  Sorry.  Where were we?”

My second role in the production was actually much more exciting than the first.  I was to appear in the curtain call with Miss Burke.  At the end of the play, her character receives as a reward for her victory, a Solid Gold Cadillac; so, when she appears for her cutain call, she is to be brought on by her Solid Gold chauffeur.  I got that assignment because I was the kid who fit into the costume, which consisted of gold lamé pants, jacket, boots, cap, and gloves.  My face was smeared with gold makeup during the Act 2 intermission, and I was told to take my place in the wings during the final applause.  Miss Burke would come offstage, have a sip of water, grab my hand, and lead me out to warm, enthusiastic applause.  The stage manager told me that after I led Miss Burke out for her curtain call, I was to take a step back and, as she bowed, leave the stage.  As the week wore on, my step back grew slower, and my exit less rapid.  I finally ended up lingering in her light so long that the curtain was coming down with me basking in the glow behind her.  Miss Burke was totally unaware of my presence.

At the last perfgormance, the audeience’s enthusiasatic applause swelled even more than usual, and emboldened by the acceptance, I remained close to the star and reached out and took her hand as she rose from her slight curtsy and grandly led her off the stage.  She turned, looked at me with utter bemusement, and as we hit the wings she said, “Musn’t be greedy, dear.  Your time will come.”

You’ve Got to be Carefully Taught:  The Wizard of Oz Tutorial for Youngsters

Movie Quote of the Day: Charlie... 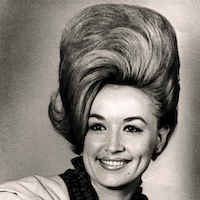 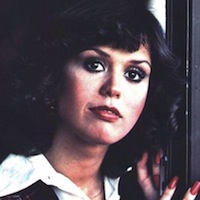