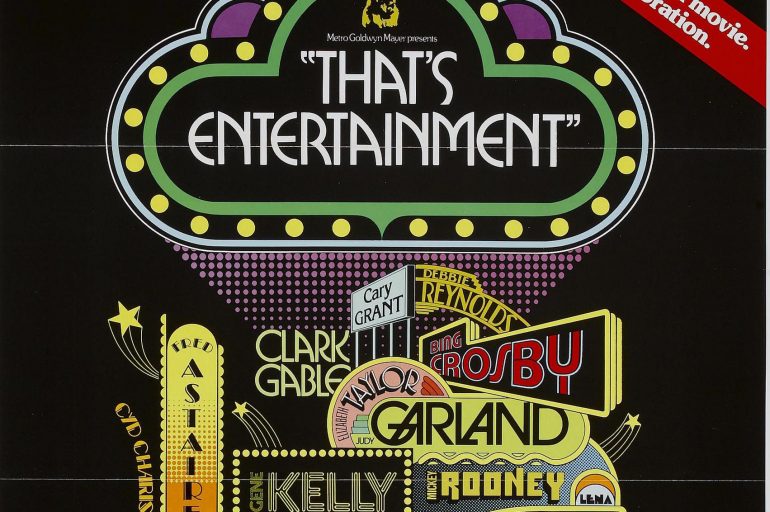 Ten years before the home video explosion of the 1980s and decades before TCM and YouTube brought the full measure of film history into our homes, MGM studios mined their rich archive to create what amounted to an elegant two-hour clip package honoring its own illustrious history of musical film. The resulting picture was That’s Entertainment, a joyful trip down memory lane whose success is widely credited with kickstarting mainstream cultural interest in Hollywood films of the golden age and once and for all insuring the studio’s awareness of the value of their history.  After years of decline marked by personnel shifts, mounting losses, and a destablizing lack of cohesive corporate strategy, (including selling off parcels of its historic backlot and its props, costumes, and memorablia), MGM coffers swelled, albeit briefly, with the release of That’s Entertainment and the template for the proper valuation of ancient copyrights was minted for all time in the stockholder’s favorite color: green. 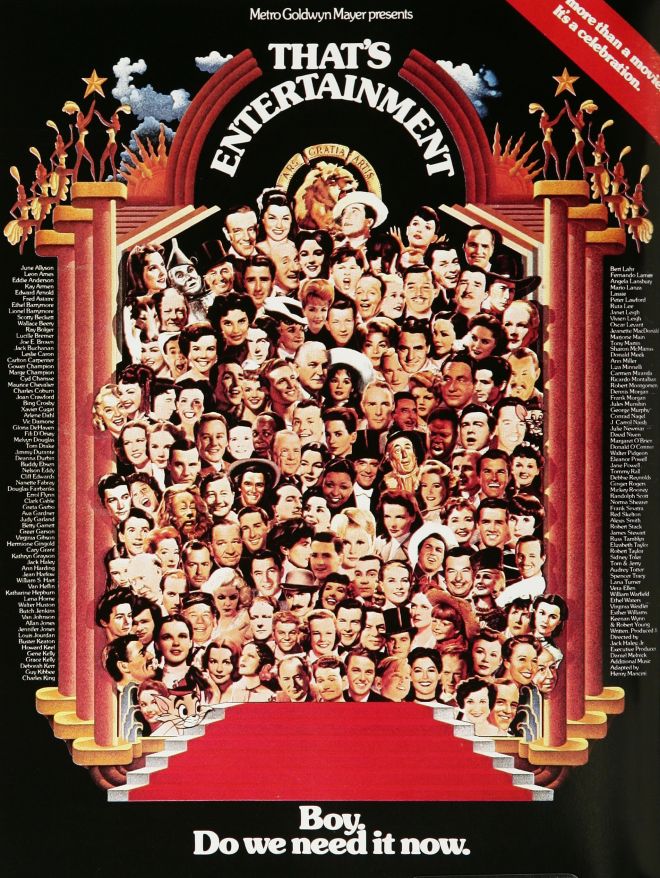 The new introductory segments that were filmed to organize the film clips were hosted by an elite group of MGM alumni like Frank Sinatra, Debbie Reynolds, Peter Lawford, Elizabeth Taylor, Mickey Rooney, Fred Astaire, James Stewart, Bing Crosby, and Gene Kelly.  I find it poignant that these interstitials were the last thing filmed in the section of the Culver City backlot that was subsequently sold to developers and turned into condominiums to offset the studios sinking fortunes.  That’s Depressing.

That’s Entertainment cost next to nothing to make, brought the floundering studio a major cash infusion and spawned three sequels.  The film’s marketing campaign at once invoked the former magic of Hollywood’s Tiffany studio and the enervated mood of the 1970’s recession- and Watergate-weary America with the tag line “Boy.  Do we need it now”—shades of the Busby Berkeley musicals’ unique ability to lift the spirits of moviegoers.  I have compiled two riveting clips saluting the stars of MGM, one from the 25th anniversary of the studio in 1949 and one from the That’s Entertainment premiere of 1974.

When I was in 6th or 7th grade, I found a book in the school library called The MGM Stock Company, by James Robert Parish and Ronald L. Bowers, which chronicled the history of the studio during its heyday—what historian/director Peter Bogdanovich often refers to as the “Classical Period.”  Despite the fact that I could not easily reference any of the movies in those pre-VHS days, that book became one of the sacred texts of my childhood: even just reading the story of the studio and its contract players was fantastic.  The magical glamour factory of MGM Culver City back lot was a powerful vehicle for my imagination, providing a twinkling portal from the boredom and discomfort of my life in New Jersey to a different, better world.  This clip from Debbie Reynolds’ segment of That’s Entertainment, in which she narrates another clip from a 1949 luncheon celebrating the studio’s 25th anniversary, visually expresses the feeling I had as a lonely kid reading The MGM Stock Company obsessively in the school library.  The newsreel-style footage features most of the major stars of the period.  Of particular note is how perfectly miserable Lena Horne looks and how little interest Judy Garland has in her lunch (amazing how a few Benzedrines can cut your appetite.)

25 years later, to promote That’s Entertainment, MGM threw a big premiere and trotted out every living star of its golden period to celebrate the studio.  In this wonderful clip, hosts Sammy Davis, Jr. and a super-caffeinated Liza Minnelli introduced these actors one by one; the mere act of watching them walk (or hobble, or roll, in Jimmy Durante’s case) onto a rather juvenile set of chorus risers makes for great entertainment in and of itself.  And they’re all here, from Gloria Swanson to multiple Gabors to Fred and Adele Astaire.  It’s a hoot to see the mostly horrible 1974 fashions (notable exceptions include Janet Leigh’s stunning “boho chic” tie-dyed ensemble, Donna Reed’s fetching tangerine number, and Shirley MacLaine in a simple black dress and My Name is Barbra page boy).  It’s at once a fashion show, a tribute, a memorial and, in the final analysis, a really entertaining list. 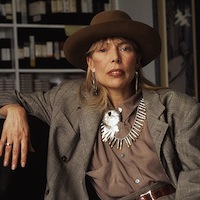 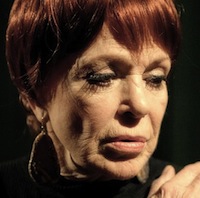 Annie Ross at the Metropolitan Room, New York City: The Singer as Actor